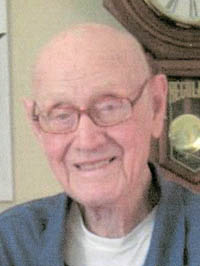 Eugene H. â€œGeneâ€ Baughman, 94, and a lifetime resident of Marshall County departed this life Tuesday, February 27, 2018 after a short illness. He was born to Bill and Blanche (Heim) Baughman on March 9th 1923. Gene served in the U.S. Air-Force during World War II and flew 32 missions over Germany as a flight engineer and a top-turret gunner with the 487th bomb group in Lavenham, England. When he came home he married Pauline Iris Maurer in 1945. They raised three children together and enjoyed 73 years of marriage in the Tyner-Walkerton area.
Gene retired from Wheelabrator Corporation. In his retirement years he enjoyed working for Century Link Telephone Company in Plymouth, flying powered parachutes and reading aviation history.
Surviving are his wife, children, Ann Lynn LeHue of Plymouth IN, Linda (Marty) Lester of Lansing MI, and Lanny (Patty) Baughman of Walkerton IN; sister, Betty Metcalf of Plymouth; nine grandchildren and 17 great-grandchildren; and beloved dog, Missy. Proceeding him in death are his parents, four brothers: Paul, Billy, Barney, and Glenn, grandson, Jerimah Jacob â€œJayâ€ Baughman and great-grandson, Robert â€œBobbyâ€ Daggett. Friends are invited to join them at the Tyner Cemetery in Tyner, for a graveside service on Sunday, March 4th at 2:00 p.m. A celebration of Life will follow at the Ponderosa in Plymouth.