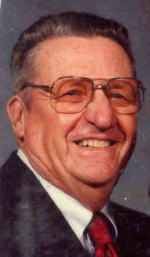 Eugene K. “ Gene” DeMien, Sr, 77, died at his residence, 14474 Lincoln Hwy., in the loving care of his family and the Marshall County Hospice, at 6:15 a.m., Wednesday, Jan. 9, 2002. Gene, a non-smoker, was diagnosed with lung cancer in Oct. of 1999. Born in LaPorte, Ind., on Jan. 12, 1924, the son of George C. and Cecel M. Yockum DeMien, Gene attended Phillips, South Dakota elementary schools and graduated from LaPaz High School in 1942. On Christmas Day, Dec. 25, 1942, in Plymouth, at the Heyde family home, Gene and Marjorie A. Heyde were married. Two months later, Gene went off to war. During World War II, he was a corporal in the United States Army, serving in the Pacific Theater from 1943-1945, stationed in the Philippines and in Japan. He lived in Plymouth most of his life, and following his return from service he joined the VFW Post #1162 and American Legion Post #27. Gene worked at Bomarko for 18 years. He also moved houses, putting three on their farm. A pioneer in recycling metal products, he was widely known at industrial auctions, factories and bankruptcy sales across northern Indiana, buying scrap metal to cut up and brass and copper for resale. He loved auctions and attended until his illness would no longer allow. Gene gave most of the treasures he found to friends. The church kitchen at the North Salem Church of God is furnished with Gene’s auction bargains: the stove, sink, cabinets…all from auction. He was also an expert furnace installer and repairman. A dedicated Christian, Gene was a member of the North Salem Church of God for over sixty years. A church trustee for many years he provided many services for his church. In addition to his devoted wife, Marjorie, Gene is survived by two sons and their families. His sons are: Eugene K. Jr. and Penny DeMien, Plymouth, and their daughters Nicole L. and Barry Hiatt and their children, Bryton and Nathanael all of Plymouth and Erin DeMien, Indianapolis. Gene’s son, Stephen P. and Anna DeMien live in Honolulu, Hawaii, with their children, Angela G., Amy M., and Andrea G. DeMien. Three brothers, Walter L. and Mary Lou, Plymouth, Wallace T. and Marian, Peru, Ind., and Fred G. and Helen, St. Charles, Ill., together with a sister, Carrol E. and Kenneth Alwine, South Bend, also survive along with several nieces and nephews. Gene was preceded in death by his parents, a brother, Elsworth DeMien and two sisters: Henrietta Beghein and Doris Julia Milkey. Friends may visit with the family at the Johnson-Danielson Funeral Home, 1100 N. Michigan St., Plymouth, on Friday, Jan. 11, 2002, from 4 to 8 p.m. Funeral services in the funeral home will be at 11 a.m. on Saturday, Jan. 12, 2002. The Rev. Stanley L Lawrence, pastor of the North Salem Church of God, and Tim Pearson will officiate. Full military honors will be accorded Gene at the graveside in New Oakhill Cemetery, Plymouth. Memorial gifts may be made to the North Salem Church of God or to the Marshall County Hospice.