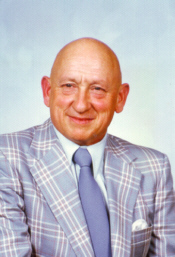 A resident of the Plymouth area most of his lifetime, Eugene LeRoy Wooldridge, 70, formerly of 1537 Kenwood Ave., died at 8:30 a.m., following an extended illness, on Saturday, July 12, 2003, in Our Lady of Holy Cross Care Center, San Pierre, Ind., where he had lived for the past two years.
Born in Culver, Ind., on January 7, 1933, Gene was the son of Donald Amos and Hattie Mae White Wooldridge. He attended Culver schools and Argos High School.
On June 7, 1959, in the Plymouth Wesleyan Church, Gene and Barbara Harriett Snyder were married.
He worked for McCord Corp. for 23 years, was co-owner of Barbara’s Drapery Shop for 25 years and was employed by the Culver Tool and Engineering Co. for five years. He retired in 1998.
An avid golfer, Gene played in several men’s leagues. He was a sports enthusiast, particularly of the Cubs and Bears. Interested in civic government, he faithfully followed political debates.
Gene is survived by his wife, Barbara, and by three nephews and a niece. They are David Cooley, Donna and Harold McCalla, both of Fulton County; Don and Maria Cooley, Jr., Calif., and James Upp III of Marshall County. Several great – nieces and great-nephews survive as well.
He was preceded in death by his parents and by Linda Kay Upp, a sister.
Visitation will be held in the Johnson-Danielson Funeral Home, 1100 N. Michigan St.., Plymouth, from 4 to 7 p.m. on Tuesday, July 15, 2003, and for one hour prior to services in the church.
Funeral services for Gene will be at 10 a.m. on Wednesday, July 16, 2003, in Sunrise Chapel, 11802 Lincoln Highway East, Plymouth, where he was a member. The Rev. Rustin Krapfl, pastor, will officiate.
Burial will be in New Oakhill Cemetery, Plymouth.
Memorials in Gene’s memory may be made to the Church Building Fund.