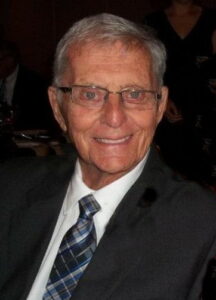 Eugene N. Chipman Sr., 94, peacefully passed away with his loving family by his bedside at 5:23 p.m. on Tuesday, December 7, 2021, at Miller’s Senior Living Community in Plymouth.Born in Plymouth, Indiana on December 1, 1927, Eugene was the son of Emily (Nelson) and Albert Byron Chipman Sr. He attended Lincoln High School but graduated from Culver Military Academy with the Class of 1945. While at CMA, he was chosen as Captain of the Basketball and Track Teams. Eugene would then attend the University of Michigan from 1945-1946 until he was awarded an Appointment to the United States Naval Academy in Annapolis, Maryland. While at the Naval Academy, he was selected as the Captain of the Crew Team and in 1950, was chosen as an All- American Crew Team Member.

As a Midshipman at the Naval Academy, Gene met his future bride, Ida Bell Hardin on a blind date. Their unforgettable June 1950 wedding was featured in national magazines as the Woodbury Bride of the Month. Ida was, and always will be “My Bride, Forever”.

After graduation in 1950 from the USNA with an Electrical Engineering Degree, Gene’s first assignment was the Naval Academy’s Assistant Crew Coach in Annapolis. He then was assigned to the USS Vogelgesang out of Norfolk, Virginia until 1951. Eugene was then selected to start Naval Flight School in Pensacola Florida and received his Naval Wings of Gold in 1952 where he flew multi-engine aircraft. After fulfilling his commitment to the Navy as a Lieutenant Commander, and with a growing family, Gene enrolled in the Indiana University School of Law in Bloomington. The goal was to practice law with his father, Albert. He attained that goal in 1959 and settled back in Plymouth for the remainder of his life. He would often say he wanted to live nowhere else.

Eugene served in many capacities as a Lawyer: an elected Marshall County Prosecuting Attorney; an appointed County Attorney, an Attorney for countless boards and commissions; private practice; and Judge of the Indiana Court of Appeals in Indianapolis. Chip resigned from the Indiana Court of Appeals as his goal then was to practice Law with his son, Nelson – just as his father had done with him over two decades earlier. He attained that goal in 1981.

Throughout his career, Chip held leadership positions in numerous organizations devoted to the improvement of legal services provided to the public. He also relished lecturing to law school students about demonstrative evidence in the courtroom— the objective always being to improve. He was responsible for, and most proud of, recruiting young and later prestigious lawyers to the community, not the least of which included Martin Morrison and Jere Humphrey.

Although later in his career he was elected Judge of Marshall Superior Court No.1, a position previously held by his father Albert, and even later elected County Commissioner. Chip would readily share that his greatest professional satisfaction was derived from helping his friends and neighbors resolve legal challenges that complicated their lives; no matter how large, and certainly just as important, no matter how small. It was nothing for Chip to spend hours talking with a client about the problems in their life, and never bill a cent for the advice. Sadly, they don’t make lawyers like the Honorable Eugene Nelson Chipman anymore.

In May 1994, Eugene was selected to be in the Inaugural Class of the Athletic Hall of Fame for Culver Military Academy, and also received the Honor of an Indiana Sagamore of the Wabash. Eugene was happily married to Ida Belle for 69 wonderful years who lovingly called him “Chip”. They raised their four children in Plymouth and were affectionately called Mama Do and Pops by their eleven grandchildren. Pops would take his grandchildren to Blue Angel Airshows, build doll cradles, little kitchens for his granddaughters, a pirate ship treehouse, wooden airplanes, and pull toys, and attend every one of their athletic events. Each year, all of the families would look forward to Mama Do and Pops’ Week-end where we would travel to children’s museums, hotels to swim indoors, and state parks to sled and play games. Pops was an avid leather craftsman and his family and many friends have belts, key chains, and coasters custom-made by him. One of his finest creations were his hand-carved duck decoys. His favorite pastime was to go to auctions and restore furniture into pieces of art for Ida and his children. He also enjoyed playing golf and was a long-time member of the Plymouth Country Club.

Chip was preceded in death by his “Bride Forever” Ida Bell on February 3, 2020; his parents; his in-laws; grandchildren, Jenna Kelsey and Benjamin Eugene Nichter; his brother Albert, and his sisters-in-inlaw Esther Chipman, and Mary Lou Hardin.

Friends may visit and celebrate Chip’s life with his family on Tuesday, December 14, 2021 from 2:00 pm – 4:00 pm at the Johnson-Danielson Funeral Home, 1100 N. Michigan Street, Plymouth. His Memorial Service will begin after visitation at 4:00 p.m. with Life Celebrant James Smart officiating.

The Chipman Family would like to give a special THANK YOU to our Dad’s loving caregiver, Rhonda Miller, and her support team of LeAnne Andert, Amy Zabala, and Dylanie Miller. In addition, the Staff of Miller’s Assisted Living and the Center for Hospice Care in Plymouth for providing enduring love and care of our Dad during this journey.