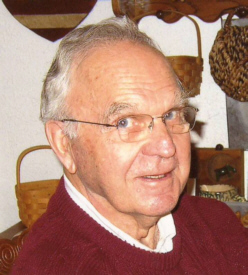 Eugene O. “Pappy” Boos, 89, passed away on Saturday, June 8, 2013, at 10:25 a.m. in RiverCrest Specialty Hospital, Mishawaka, IN.
Born in Pulaski, Indiana on May 17, 1924, he was the son of Louis and Marie P. (Bond) Boos.
Gene graduated from Pulaski High School with the class of 1942. He then served in the United States Marine Corps. in WWII. He was awarded a Purple Heart and one Gold Star for injuries in combat.
On August 5, 1945 in Buffalo, IN., Gene and Ellen VanScoyk were married. The couple moved from Royal Center to Plymouth in 1947.
Considered a lifetime farmer, he was involved as a 4H Leader in Marshall County and was named an Honorary Plymouth FFA Chapter Farmer. He drove a Plymouth Community School Corporation bus for 35 years and was the sole driver for the PHS Wrestling team.
Gene had a love of sports especially fast pitch softball which he played for over 50 years as a catcher in the church and travel league programs. His team won many trophies and he was inducted in the Indiana Hall of Fame. He enjoyed watching the Plymouth Girls Fast Pitch games.
He is nearly a 65 year member of the Plymouth Church of the Brethren, and holds Lifetime Membership in the Disabled American Veterans, the VFW Post 1162, and the American Legion Post 27, all of Plymouth.
Gene is survived by his wife Ellen of 68 years, three sons and two daughters and their families. His sons are; David Eugene (Jean) Boos, Cade, S.C., and children: Jeremy Boos, Jordana Megonigal and Bethany Boos. Gregory D. (Jo Ellen) Boos, Overland Park, Kansas, and children: Amanda Boos, Derek Boos, Destiny Boos and step-child Lindsay Sanders. Randall L. Boos of Plymouth and step-children: Michel Scott and Tanya Mata.
His daughters are; Janice E. Bean of Plymouth and children: Carey Personette, Craig Houin and Troy Houin. Barbara L. (Douglas) Klapp, of Plymouth and children: Dustin Klapp and Charisa Hondorp. Sixteen great-grandchildren and step great-grandchildren also survive.
One brother; Paul (Ann) Boos and one sister-in-law; Carolyn Boos all of Winamac, IN survive along with numerous nieces and nephews.
Gene was preceded in death by a son John V. Boos in 1990, a sister, Harvene Fisher and three brothers; Louis Boos Jr., Allen Boos and Edward Boos.
Visitation will be on Wednesday, June 12, 2013, from 4 to 8 p.m. in the Johnson-Danielson Funeral Home, 1100 N. Michigan St., Plymouth.
Funeral services for Gene will take place on Thursday, June 13, 2003, at 11 a.m. in the Plymouth Church of the Brethren, 1130 N. Michigan St., with Pastor Ruth Yoder officiating. Calling will be held at the church one hour prior to services.
Burial will follow, with military honors provided by members of the Plymouth American Legion Post 27, Veterans of Foreign Wars – Marshall County Post 1162 and the DAV, in the New Oakhill Cemetery.
Memorials in Gene’s memory may be made to Habitat for Humanity, 116 S. Walnut St., Plymouth, IN 46563 or Plymouth High School Girls Fast-pitch Softball Program, 1 Big Red Drive, Plymouth, IN 46563.