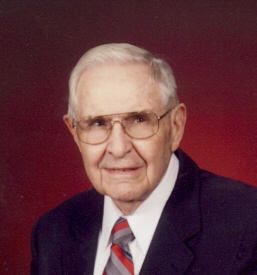 Longtime Plymouth resident, Eugene R. Christiansen, 89, passed to his eternal home at 7:20 a.m. Thursday, July 7, 2011 in Parkview Hospital, Ft. Wayne from complications of a stroke last Sunday evening. He had recently moved to Kingston at Dupont – Memory Care Unit in Ft. Wayne. Since 2003, Gene had resided at Grace Village at Winona Lake, Indiana, but no matter where Gene Christiansen resided, he instilled in others his true sense of community and it was never greater than while he called Plymouth his home.
Gene was born, the son of Alvin F. and Elsie M. (Kerchenfaut) Christiansen, in Gibson City, Ill. on October 16, 1921.
He graduated from Brookston High School in 1939 and from Purdue University in December of 1942 with a degree in Agriculture. He remained true to his alma mater and had been active with the John Purdue Club and was proud of his descendants who also became Boilermakers.
Gene served his country in WWII in the Army Air Corp.
On December 28, 1944, he married the former Anna F. Vanderbilt in Brookston, Indiana. Ann preceded him in death on November 9, 1996 while they were attending a function at Purdue.
His working career began as an Ag teacher in Lowell, Ind. and then continuing in Spiceland, Ind. In 1952 Gene accepted a position in Plymouth with Prudential as a mortgage loan officer for the next 17 years. He then shifted to Norcen Bank in that same position and after another 17 years he retired as a Senior Vice-President.
Gene remained an integral part of the Plymouth business community and served as an interim Director of the Chamber of Commerce, a PIDCO officer and eight years as a member and past-president of the Plymouth Community School Board.
He was a Sunday school teacher and served on numerous church boards of the First United Methodist Church of Plymouth which he attended for over 50 years.
He was a proud member of the Plymouth-Kilwinning Lodge No. 149 since his transfer from Spiceland in 1956. He received the Indiana Grand Lodge “Award of Gold” in May, 1999 for 50 years of continuous membership. He also held membership in the Ancient Accepted Scottish Rite Valley of South Bend.
Continuing his civic efforts, Gene was a 40 year member of the Plymouth Chapter of Kiwanis International, having served as President. His all important role was being a family man, he is remembered for his love of pie – especially Ann’s, teaching his sons the art of fishing and gardening and the staying power of a true Chicago Cub fan. Gene could have been a meteorologist as he loved to watch the weather.
Gene is survived by two sons and their families. They are: Mark A. and Terri L. Christiansen, of Auburn, and children, David, Mae and Benjamin Christiansen. Scott E. and Arlene Joy Q. Christiansen who live in Baldwinsville, NY and children: Anthony and Erik Christiansen. One great-grandson, Tony’s son Xander.
Gene was preceded in death by his parents, Ann, his wife and Harold, a brother.
Visitation will begin on Sunday, July 10, 2011, from 1 to 4 p.m. in the Johnson-Danielson Funeral Home, 1100 N. Michigan St., Plymouth. Masonic Rites will be accorded Gene at 4 p.m. on Sunday in the funeral home by members of Lodge 149.
Calling at the First United Methodist Church, 400 N. Michigan St., Plymouth, after 10 a.m. on Monday, July 11, 2011until time of services at 11 a.m. conducted by the Rev. Matthew Pickut
Military graveside honors in New Oakhill Cemetery will be provided by members of the American Legion Post 27, VFW Post 1162, D.A.V. and the Indiana Honor Guard of South Bend.
Memorial gifts may be made to the Church or Plymouth Kiwanis Club – Community Projects Fund P.O. Box 504, Plymouth, IN 46563