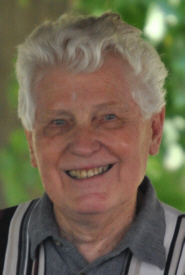 Eugene R. Gray, 85, passed away peacefully with his wife by his side Sunday morning, February 7, 2016 in the Catherine Kasper Nursing Home, Donaldson.
Gene was born on October 29, 1930 in Providence, Rhode Island to David R. Sr. and Edwina P. (Ryon) Gray. He graduated from Brown University with a bachelor’s degree in chemistry.
He married the former Beverly Rounds, who would precede him in death.
Gene worked as a chemist in pharmaceuticals for Olin Corporation, Dupont and lastly for Houba in Culver, from which he retired.
On December 30, 1995, Gene took as his bride the former Phyllis J. Hessler to be his wife in the St. Thomas Episcopal Church.
He enjoyed being with people, family and friends alike. Gene appreciated reading and doing puzzles, and watching birds. Phyllis and he also loved each other’s company when they went out to eat.
Gene was a member of the St. Thomas Episcopal Church, where he served as usher, on the church’s vestry, in the Brotherhood of St. Andrew and Friday morning breakfast group. He was a member of the Masonic Lodge #149 in Plymouth and the Scottish Rite in South Bend. He served on the board of directors for the Plymouth American Red Cross, on the current board for the Community Resource Center in Plymouth, and was chairman of the Marshall County Local Emergency Planning Committee for several years.
He is survived by his loving wife of 20 years, Phyllis of Plymouth, and his daughter, LeeAnn (John) Crowley of RI; his brother, David R. (June) Gray Jr. of RI; and his brother-in-law, Geraldo Coppolelli of RI.
His extended family includes his step-daughter, Rebecca (Dean) Meyer of TN and his in-laws: Herbert (Betty) Muffley of OH, Jimmie Muffley of VA, Richard (Martha) Muffley of Plymouth, Linda (Allen) Wayne of Plymouth and James Brinkman of Plymouth, as well as several nieces, nephews and extended family.
He was preceded in death by his parents, brother, Gavin Gray, and in-laws: Frederick, Billy and Yong Muffley and Judith Brinkman.
Visitation will be from 4-7 p.m. on February 12, 2016 in the Johnson-Danielson Funeral Home, 1100 N. Michigan Street, Plymouth. The Masonic Lodge will offer a memorial ritual at 7:00 p.m.
Funeral services will be held at 11 a.m. on Saturday, February 13, 2016 in the St. Thomas Episcopal Church, 400 N. Center Street, Plymouth with Rev. Thomas Haynes officiating.
Memorial contributions can be made to St. Thomas Episcopal Church