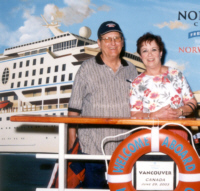 A longtime member of the Bremen Community, Eugene R. Sieg, died suddenly of an apparent heart attack in the Emergency Room of St. Joseph Regional Medical Center, Plymouth, at 8:34 p.m. on Thursday, July 10, 2003. He has resided at 331 Crimson Lane, Plymouth, for the past five years.
A man deeply committed to his Faith and fostering lasting relationships with friends and family will be dearly missed by all.
Before his death, Gene fulfilled a dream. He had just returned days before his death from a trip to Alaska where he toured much of the state and spent valuable time with his wife and friends.
Born Eugene Richard Sieg, in Ramsey, Ind., on October 15, 1932, he was the son of Edward G. and Agnes Marie Gettlefinger Sieg. Gene was fondly known as “Eukie” to many. Gene graduated from Corydon High School with the class of 1950 and from Purdue University in 1955, earning a Bachelor of Science degree in Agricultural Economics.
He then served in Germany while in the United States Army during the Korean Conflict.
On December 27, 1958, in Rushville, Ind., Gene and Mary R. Schwendenman were married.
Gene and his four brothers were part-owners of the Ramsey Popcorn Co., a family-owned business since 1946, producing ‘Cousin Willie’s’ microwave popcorn. Gene was still active in the company well into his retirement years.
A very organized man, he enjoyed gathering knowledge on many subjects and assisting others. He was actively involved in the building and maintenance of Bremen’s Jane’s Park, a living memorial to his daughter, the late Jane Stillson. He was an active member of St. Michael’s Roman Catholic Church, Plymouth. Gene served as a Eucharistic minister for St. Joseph Regional Medical Center in Plymouth and his church. He had a deep and reverent passion for his faith and demonstrated it in his study of the scriptures and actions. He was inspired by many Religious in his family, including his cousin the Rev. Bishop Gerald Gettlefinger of the Evansville Diocese. He enjoyed the sport of bowling and was a member of the Kiwanis Club of Bremen and the Plymouth Knights of Columbus Council No 1975.
Gene is survived by Mary, his devoted wife of 44 years, their children and their 13 grandchildren.
Their children are a son, Daniel R. and Judy Sieg, Georgetown, Ind., and three daughters: Julia A. and Mark Gibbs, Ottawa Lake, Mich.; Janice M. and Perry Pruitt, Noblesville, Ind., and Jonella R. and John Black, Evanston, Ill. along with son-in-law, Dr. Tod Stillson of Plymouth. Two brothers, Donald L. and Philomena Sieg, Corydon, Ind., and Wilfred E. and Doris Sieg, Ramsey, Ind., and a sister, Joan and Stanley Seipel of Lanesville, Ind., also survive with numerous nieces and nephews.
Gene was preceded in death by his parents and a daughter, Jane Elizabeth Stillson, who died on February 11, 1999.
A brother, Mark J. Sieg, and two sisters, Mary R. Robertson and Theresa Kendall have also died.
Visitation will be on Sunday, July 13, 2003, from 1 to 7 p.m. in the Johnson-Danielson Funeral Home, 1100 N. Michigan St., Plymouth. A prayer service will be held at 7 p.m., followed by the Rosary at 7:30 p.m.
A Mass of Christian Burial will be celebrated for Gene on Monday, July 14, 2003, at 11 a.m. in St. Michael’s Roman Catholic Church, 625 N. Center St., Plymouth, Ind. The Rev. Father Terry Fisher, pastor of St. Anthony’s Roman Catholic Church, Mishawaka, will officiate.
Burial will follow in New Oakhill Cemetery, Plymouth.
Memorial gifts in Gene’s memory may be made to Jane’s Park, c/o The Marshall County Community Foundation, P.O. Box 716, Plymouth, IN 46563 or the Marshall County Right to Life.