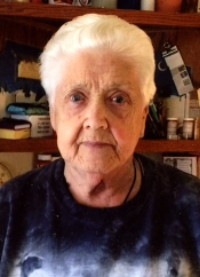 Evalena Barcus, 97, passed away on Wednesday morning, May 22, 2019 at Miller’s Merry Manor, Plymouth surrounded by her loving family. Evalena was born in Plymouth, IN to James and Elizabeth (Anderson) Howard. Evalena attended the Plymouth school district. Evalena married Charles H. Barcus also of Plymouth, on June 15, 1937, and started their home in Plymouth.
Evalena was the mother of 12 children. She had a half-acre garden and enjoyed growing and canning all of her vegetables. She also enjoyed her flower garden. Evalena was known for her beautiful handwriting and her love of handwriting personal letters and cards.
Left to mourn her memories are her children Jim (Maryann) Barcus of Frankfurt, IL, Ruth (the late John R.) Shorter of Plymouth, Jean (Bob) Rees of Plymouth and Sharon (the late Dale L.) Kamp of Plymouth; 25 grandchildren and several great-grandchildren and great-great-grandchildren.
She was preceded in death by her parents James and Elizabeth Howard, her husband Charles H. Barcus, her sons Charles E. Barcus, Paul R. Barcus, Robert H. Barcus, her daughters Laura L. Stiles, Sandra F. Davenport, Betty L. Lawson, Nancy S. Spiek, and Linda L. Keller; her granddaughter Gina S. Boetsma and all of her 7 siblings.
Visitation for Evalena Barcus will be held on Tuesday, May 28, 2019, from 11 a.m. until 1 p.m. with services following at 1 p.m. with the Rev. Chuck Kreig officiating, all at Johnson Danielson Funeral Home 1100 N. Michigan Street Plymouth, IN 46563.
In lieu of flowers donations in Evalenaâ€™s name to the Woman of the Moose #741 1225 W Jefferson St. Plymouth, Indiana 46563 would be appreciated.