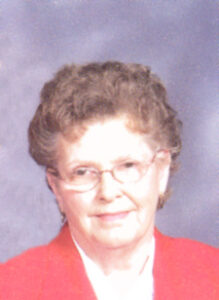 Evedene Virginia Wilhelm, 82, 221 Liberty St., Plymouth, died of natural causes in Pilgrim Manor, at 8:42 a.m. on Friday, January 9, 2009.
Born in Teegarden, IN., on February 25, 1926, Evedene was the daughter of Walter and Lillian Angeline Devine Kaiser. She graduated with the class of 1944, from Tyner High School.
After World War II, when Jack Wilhelm returned home to Teegarden, he and Evedene, his high school sweetheart, were married on August 10, 1946.
Evedene worked as a teller with First Source Bank for eight years and was also employed for five years in the Plymouth School System as a cook. She and her family were active members of the First United Church of Christ and Evedene served in the Eastern Star organization.
An avid Big Red sports fan along with her husband, she also enjoyed decorating her home and yard with flowers. Every spring her little wooden donkey and cart would grace her porch, signaling a new season. She helped Jack with his responsibilities as a Democrat precinct committeeman for more than 40 years. Jack died on May 29, 2006.
She had two dogs that she dearly loved and cared for.
Evedene is survived by a son and daughter, Scott Wilhelm and Jacqueline and Rex Nifong, both of Plymouth.
A grandson, Brian Nifong, of Indianapolis , and a granddaughter, Lisa Nifong, Bremen, also survive together with two brothers, Keith (Nancy) Kaiser, Bremen, and Harold (Leslie) Kaiser, Mishawaka.
She was preceded in death by her parents, her husband and a brother, Robert Kaiser.
Friends are invited to celebrate the life of Evedene Wilhelm with her family at the Johnson-Danielson Funeral Home, 1100 N. Michigan St., Plymouth, from 3 to 8 p.m. on Monday, January 12, 2009, and after 7 a.m. on Tuesday, January 13th.
An Eastern Star Service will be held at 7:30 p.m. on Monday evening, January 12th, in the funeral home.
Services for Evedene Wilhelm will be held at 11 a.m. on Tuesday, January 13, 2009, in the First United Church of Christ, 321 N. Center St., Plymouth. The Rev. Charles Krieg will officiate.
Evedene will be laid to rest next to her husband in the New Oakhill Cemetery, Plymouth.
Memorial gifts in her memory may be made to the First United Church of Christ.