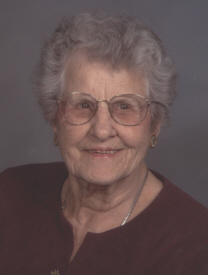 Evelyn E. Zumbaugh, 94, formerly of Baker Street, passed away at 10:00 a.m. on Monday, March 3, 2014 at Miller’s Merry Manor, Plymouth.
Born in LaPaz on January 21, 1920, Evelyn was the daughter of Frank M. and Elsie Bachtel Rankert. She graduated from LaPaz High School in 1938.
Evelyn married Chalon F. Zumbaugh in the Pine Creek Parsonage in North Liberty on June 25, 1939, who preceded her in death on December 5, 1994.
She worked as bookkeeper for the Plymouth Elevator & Coal for eight years. Afterwards she worked for Marshall County Bank and Trust, now 1st Source Bank, for 18 years until her retirement.
Evelyn was a past president of the Jefferson PTA during which time finger printing of children was initiated. She was a member of the Royal Neighbors of America for 50 years and. she served the Red Cross and Community Chest Drives. She was a member of the Plymouth Church of the Brethren, serving many capacities through the years in the church.
Evelyn is survived by her son, John G. Zumbaugh of Plymouth, and her daughter, Jane A. Snook and her children, Gregory (Tammy) and David (Christy) Snook, all of Ft. Wayne. Also surviving are her grandchildren Cameron and Carson and a step-granddaughter, Melanie (Glenn) Colwell and their children Dylan, Dawson and Raegan of Ft. Wayne. Her brother Frank E. Rankert of Kokomo and numerous nieces and nephews also survive.
She was preceded in death by her parents and siblings; Crystal Metsker, Helen Tracy, Aleta Ferrell, Francis, John, Densel and an infant brother.
Visitation will be held from 12 – 2 p.m. on Thursday, March 6, 2014 in the Johnson-Danielson Funeral Home, 1100 N. Michigan Street, Plymouth. Funeral services will immediately follow in the funeral home at 2 p.m. officiated by Rev. Paul Nye.
Burial will be in the New Oakhill Cemetery.
Memorial contributions can be made to the Kidney Foundation 30 East 33rd Street, New York, NY 10016, the Center for Hospice Care 112 S. Center St. Plymouth IN 46563, or to the Plymouth Church of the Brethren 1130 N. Michigan Street, Plymouth, IN 46563.