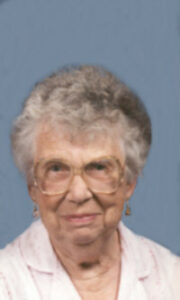 Evelyn J. Davis, Klinger Ave., Plymouth, an area resident most of her life, died of natural causes in Miller’s Merry Manor at 2:35 a.m. on Thursday, September 24, 2004. She was 88 years old.
Born in Bristol, Ind., on August 1, 1916, Evelyn was the daughter of Albert and Josephine Campbell Drake. She graduated from Tyner High School with the class of 1935.
On November 15, 1938, in Fulton, Ind., Evelyn and Raymond L. Davis were married. Raymond died on the 29th of June, 2003.
For several years, Evelyn had worked as a cafeteria employee for the Plymouth Community Schools.
She enjoyed traveling and was a longtime member of the Wally Byam Airstream Club.
Evelyn is survived by two daughters: Judy and Bob Trier, Kendallville, Ind., Teressa and Tom Wellborn, Argos, Ind.
Eight grandchildren and nine great-grandchildren survive as well, together with one brother: Albertus and Della Drake, Florida; one sister: Annabell Miller, Tyner, Ind. a sister-in-law: Beatrice Drake of Tyner, Ind. and several nieces and nephews.
Evelyn was preceded in death by her parents, her husband, a daughter, Charlene Hoffer in 1988, and three brothers and three sisters.
Friends will be welcomed by her family to celebrate Evelyn’s life at the Johnson-Danielson Funeral Home, 1100 N. Michigan St., Plymouth, on Monday, September 27, 2004, from 4 to 7 p.m.
Funeral services will be held at 10:30 a.m. on Tuesday, September 28, 2004, in the funeral home. The Rev. William Kaster, of the Trinity United Methodist Church, where she was a member, will officiate.
Burial will be in New Oakhill Cemetery, Plymouth.
Gifts in memory of Evelyn may be made to the Trinity United Methodist Church’s Elevator Fund.