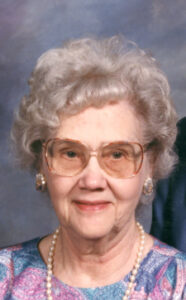 Evelyn Lenore Peters, formerly of Plymouth and Garden Court East, living the past two years in Anderson, Indiana, died of natural causes at 2:30 p.m. on Wednesday, April 5, 2006, in the Bethany Pointe Care Center, Anderson.
Evelyn was 86 years old.
Born in Bremen on August 19, 1919, she was the daughter of F. Douglas and Vera L. Reese Marks.
She graduated from LaPaz High School in 1937.
On September 2, 1939, in Bremen, Evelyn and Elmer H. Peters were married. Elmer and Evelyn had met when he was the county 4-H agent. Elmer died on August 20, 2003.
Evelyn was the Food Service Director for the Plymouth Community Schools from 1963 to 1968. She became a real estate salesperson with Thompson Realty and then entered Property Management as a site manager with Garden Courts Inc. until 1979. She then served for many years on the Garden Courts Board as secretary.
A multi-talented person, she loved gardening – flower and vegetable. She sewed beautifully, crocheted and knitted. Evelyn was adept at researching genealogy along with her husband and was a member of both the Marshall County Genealogical Society and the Indiana Genealogical Society. She enjoyed traveling and had visited in all 50 states and a trip to Great Britan. She and Elmer had enjoyed walking and bicycling and various crafts during their lives together.
Active in 4-H as a youth, she was also an adult leader in the organization. She was instrumental in organizing the Marshall County Diabetic Club.
Evelyn, as a child, attended the Shiloh Church where many Reese ancestors had worshipped. A longtime member of the First United Methodist Church, she was a member of the United Methodist Women’s Circle and the Mother’s Club.
Evelyn is survived by two daughters and a son. Her daughters and their spouses are: Jane A. and John H. Silvey, Middletown, Indiana and Cheryl A and Barton N. Ball, Rochester, Indiana.
Her son is Gary D. Peters, living in Grand Rapids, Michigan.
Four grandsons and a granddaughter also survive her death. They are: Brent and Nicole Silvey, Noblesville, Indiana; Jarrod Ball, Greensboro, North Carolina; Brad Ball, Blacksburg, Virginia, Scott Silvey, Tokyo, Japan and Elyssa Peters, Grand Rapids, Michigan.
Several nieces and nephews also survive her death.
Evelyn was preceded in death by her paents, Elmer, her husband of 66-years, an infant son, Terry L. Peters, three brothers, two sisters including Virginia Suter. Friends are invited to come to celebrate Evelyn’s life and service on Sunday evening, April 9, 2006, 5 to 7 p.m. and after 7 a.m. on Monday morning – at the Johnson-Danielson Funeral Home, 1100 N. Michigan St., Plymouth.
Funeral services for Evelyn will be held on Monday, April 10, 2006, at 11 a.m. in the funeral home. The Rev. Dr. Dean Fager, pastor of the church, will officiate.
Burial will be in Oakhill Cemetery, Plymouth.
Memorial gifts in Evelyn’s memory may be made to the First United Methodist Church, 400 N. Michigan St., Plymouth, IN 46563 or the American Diabetes Association, P.O. Box 1130, Fairfax, Virginia 22038-1130.