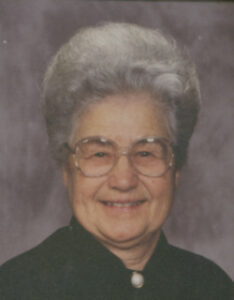 Evelyn M. “Narby” Eyrich, 77, formerly of Bourbon, Indiana, died of natural causes at 2:40 a.m., Sunday, February 24, 2008, in the Northern Lakes Nursing Home, Angola, Indiana.
Born on June 29, 1930 in LaPaz, Indiana, the daughter of Samuel Homer Oliver and Ethel Hester Hildebrandt Thornburg, Evelyn graduated from West High School with the class of 1948.
On July 4, 1948, in Plymouth, she and Carl L. Eyrich were married. Carl died in June of 1998.
She helped Carl run the farm: she collected and sold eggs and tended to the animals and helped with the field work. She also worked at Orthopedic Equipment Company in Bourbon.
A lifetime member, Evelyn was very active in her church, the House of Prayer, especially in the Women’s Ministry. She enjoyed fishing and making afghans. She was known across the county for the noodles and angel food cakes that she made for the church.
She is survived by her son, Steve (Betsy) Eyrich, Angola, Indiana, and by their son, Thomas Stephen Eyrich, also of Angola.
A sister, Ruth (Dennis) Zent of Nappanee and a brother, James Thornburg, Donaldson, survives as well, together with numerous nieces and nephews.
Evelyn was preceded in death by her husband, a brother, Eugene Thornburg and a daughter, Christina Correll-Laughry.
The family invites friends to share memories with them on Thursday, February 28, 2008, from 4 to 8 p.m. and after 7:00 am on Friday February 29, 2008 at the Johnson-Danielson Funeral Home, 1100 N. Michigan St., Plymouth, Indiana.
Funeral services for Evelyn will be held in the funeral home at noon on Friday, February 29, 2008. The Rev. Ron Humphrey, pastor of the House of Prayer, Plymouth, Indiana, will officiate.
Burial will be in Pleasant Hill Cemetery, Bourbon, Indiana.
Memorial gifts may be made to the Alzheimers Association.