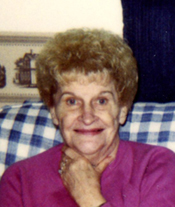 Evelyn M. Oneal, 91, of Plymouth, and formerly of Shelbyville, Indiana, passed away on Wednesday afternoon, October 10, 2018, at her home. Evelyn was born on January 22, 1927, in Shelbyville, to Frank and Hazel Deho Phillips.
Evelyn graduated from Shelbyville High School.
She was married to Donald Oneal from 1951 until 1970.
Evelyn was employed at the Garment Factory in Shelbyville for 10 years, and then became a full-time homemaker. She moved to Plymouth in May of 2007, to be closer to her son and grandchildren. She loved reading books, bingo, and watching murder mysteries on TV.
She was a member of St. Joseph Catholic Church in Shelbyville for many years.
Survivors include her son and daughter-in-law, Larry (Karen) Oneal of Plymouth; grandson, Travis (Linley) Oneal and their daughter Allison of Plymouth; granddaughter, Marcy Bogunia (Jeff Gustafson) and their children, Kaden and Keegan Gustafson of Walkerton; grandson, Matthew (Sondra Beatty) Bogunia and their son Logan of Walkerton.
Evelyn was preceded in death by her parents, four brothers and one sister, a daughter, Beth Ann Oneal, in 1959, a daughter-in-law, Teresa Oneal, on September 13, 1999, and her former husband.
A memorial visitation will be held for Evelyn on Wednesday, October 17, 2018, from 5:00 to 7:00 P.M. at the Johnson-Danielson Funeral Home, 1100 N. Michigan Street, Plymouth, Indiana with a memorial service immediately following at 7:00 P.M., with Fr. Craig Borchard officiating. Inurnment will take place at a later date in Shelbyville.
Memorials may be directed to â€œConcerns of Police Survivorsâ€ or C.O.P.S., which is a nationally recognized charity that benefits the families of Officers who are lost in the line of duty. C.O.P.S. P.O. Box 3199 Camdenton, Missouri 65020.