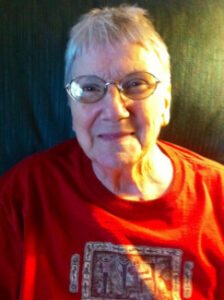 Evelyn P. Wilcox Riley, a lifetime area resident, died four days before her 76th birthday, at 1 a.m. on Sunday, August 19, 2012, at her home in Argos.
Born in Tyner, Indiana, on August 23, 1936, Evelyn was the daughter of John H. and Mary E. Cudney Hill.
She attended Plymouth schools until the 9th grade and later earned her GED.
Evelyn was first married to Charles Hites in 1954. Charles died in 1960, leaving his wife, Evelyn and three little girls. In 1965, Evelyn was married to Ralph Wilcox in Charksville, Tennessee. Ralph died in 1998.
On October 15, 2001, in the House of the Lord Church in Plymouth, Evelyn and Iley Riley were married.
A newspaper carrier, Evelyn worked for 30 years for the South Bend Tribune and the Plymouth Pilot News. She retired in 2005.
An avid Seamstress, she loved to sew and enjoyed doing crafts of all kinds. She was a Master Gardener and made and collected dolls. Evelyn’s philosophy was that “the family is the key to life.”
Evelyn is survived by four daughters, a son and several step-children. They are daughters: Charolette and Andrew Riale, Argos; Carrie and Stephen Patrick, Plymouth; Cindy and Larry Fee, New Market, Tenn.; Jamie (Wilcox) and Christopher Schrameyer, Plymouth and her son, Jody and Rhonda Wilcox, Plymouth.
Step-children Steven and Sue Wilcox, Kathy Marshall and Tammy and Tim Shumaker, also survive along with 18 grandchildren and 30 great-grandchildren.
A sister Mae (Carl) Kile survives also.
Evelyn was preceded in death by her parents, a sister, Betty Riley, a brother, Carl Hill and two great-grandchildren, The family will receive friends on Wednesday, August 22, 2012 from 4 to 6 p.m. in the Johnson-Danielson Funeral Home, 1100 N. Michigan Street, Plymouth.
Funeral services will be held immediately following visitation at 6:00 p.m. in the funeral home. Pastor Stephen Patrick, a son-in-law of Evelyn’s, will officiate.
Burial will be in New Oakhill Cemetery.
Memorial gifts in Evelyn’s name may be sent to: The House of the Lord Food Pantry, 16493 Lincoln Hwy., Plymouth, IN 46563.