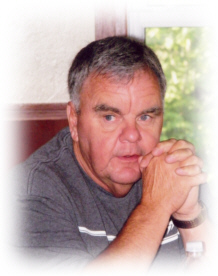 And through his faith, though he died, he still speaks…Heb 11:4
For more than 30 years, Everett Wallace taught kids how to shoot jump shots and swing a baseball bat. He also taught them about the 3 G’s (God, Good Attitude, Good Grades) and the necessity to “Keep the Faith” in Christ, despite any and all circumstances. Everett died on Thursday, August 5, 2010, at the age of 61 after a 14-month battle with esophageal cancer. He endured his illness with that same Faith as he once said, “it was a win-win situation for me. If God decides to take me home, I win. If He lets me live longer, I will win there too.” Everett has won the game.
Everett was the husband of 38 years to Deborah (Wilson) Wallace, and the father of Chad (Amy) Wallace, Jason (Jinny) Wallace, Julie (Chris) Robertson, and Kyle Wallace, and grandfather to Ally, Carson, Mason, Lily, and Rose with more on the way. Everett was passionate about sports but even more passionate about the kids he coached. He is best known for his love and dedication to serving the youth in the community as a coach. Everett was a 4-sport athlete as a 1967 graduate of Oregon-Davis high school where we led the basketball team to their first sectional basketball championship in school history. He later was inducted into the Oregon Davis Athletic Hall of Fame. Everett’s desire to impact the lives of young people and his love for his community drove him to coaching countless youth basketball, soccer and little league baseball teams. He also ran free Saturday Morning Basketball Camps for elementary students for nearly 20 years. For his efforts in youth sports, Everett won the Plymouth Chamber of Commerce Youth Service Award and received the Olympic Gold Medal Spirit Award by WNDU-TV. Everett worked faithfully at Northern Indiana Public Service Co. for 36 years. After Everett’s retirement from NIPSCO, he coached basketball both at the 7th grade level for Plymouth’s Lincoln Jr. High and as an assistant varsity coach at LaVille High School.
To Wallace, it has always been more than a game. He longed to impact the world for Jesus by impacting youth for Christ. His example in his coaching and in his bout with cancer to reflect the sufficiency of Christ continues to touch countless lives. Everett was born May 29, 1949 in Mishawaka, IN. He was preceded in death by his parents, Vern and Mildred (Patterson) Wallace. He was also preceded in death by his brothers Don Eakins, Art Eakins, Bill Eakins, Ron Eakins, and his sister Marilyn Hull. He is survived by his brother Ray (Dixie) Eakins and his sisters Mildred (Jim) Aldrich, Pattie Daniel, and Mary (Gary) Cleveland.
The viewing will be at Johnson-Danielson Funeral Home 1100 N. Michigan St., Plymouth on Sunday, August 8th from 1-5 p.m. The funeral will be at Plymouth Wesleyan Church on Monday, August 9 at 11 a.m. with calling one hour prior to services. The Rev. Oliver Dongell, pastor will lead the service accompanied by Jack Edison, Everett’s close personal friend. Burial will follow in New Oakhill Cemetery, Plymouth.
Preferred are memorial gift contributions to Campus Outreach Indianapolis, 4770 E. Main Street, Carmel, IN 46033