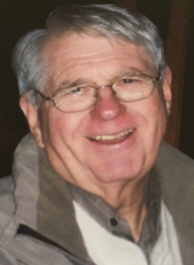 Everett C. â€œSamâ€ Holmgren, 86, passed away peacefully the morning of Monday, April 24, 2017. Sam and his wife, Melba have made Plymouth their home since 2002 coming from North Liberty.
Sam was born in Gary, Indiana on February 2, 1931 to Everette C. and Mary Alice (Farley) Holmgren. In his early years, he attended Gary Emerson and then graduated from Wheeler High School. He received his BS in Education from Ball State and there he attained his Masterâ€™s Degree as well.
While a student at Ball State he served in the ROTC program and upon graduation, Sam entered the United States Air Force as a pilot in training. Over the course of three years, Sam flew a T6 while stationed in Hondo, Texas and was assigned to the B25 while in Enid, Oklahoma. He received an Honorable Discharge in 1957.
On August 10, 1952, at the Church of the Brethren in North Manchester, Indiana, Everett took Melba L. Rice as his wife. They have experienced many joys and travels together over the past 65 years together. Their travels took them across the United States and abroad to places such as England, China and Italy. Working for the North Liberty School System and South Bend School Corporation for 34 years, Sam served as a math and science teacher and counselor at North Liberty High School, a counselor at Jackson High School. He also served as an assistant principal at Jackson and Edison Middle Schools. He retired in 1991. For many years, he served on the St. Joseph County Library Board, last serving as President. Sam loved reading and learning about various cultures and subjects and then sharing that knowledge with others. He was always present to help with projects and his family remained near and dear to him.
He was a member of the Plymouth Church of the Brethren and had been an active member of the North Liberty Lions Club.
Sam is survived by his wife, Melba of Plymouth, and their children and families: son Mark E. (Karen) Holmgren of Hummelstown, PA and daughters, Amy (Chad) Shinsky and Sarah, daughter Dee C. Carmichael of Plymouth and children, Scott, Ryan and Bryce and daughter-in-law Beth Holmgren of Pearland, TX and grandson, Shawn. His siblings include: Paul (Helen-Marie) Holmgren of Flagstaff, AZ, John (Cheryl) Holmgren of Valparaiso, and Martha Hoeppner of Valparaiso along with several nieces and nephews.
He was preceded in death by his parents, an infant daughter, Lynn L. Holmgren and son, Carl W. Holmgren.
Visitation will be held on Saturday, May 6th from 10 a.m. until 12 noon EDT in the Plymouth Church of the Brethren, 1130 N. Michigan St., Plymouth where services will begin at 12 noon EDT. Pastor Tom Anders will officiate. A family burial service will take place at the Oaklawn Cemetery in North Manchester, Indiana.
Memorial gifts may be given to Heart to Heart Hospice, 620 W. Edison Road, #122, Mishawaka, IN 46545, the Plymouth Church of the Brethren 1130 N. Michigan St., Plymouth, IN 46563 or Alzheimerâ€™s & Dementia Services of Northern Indiana, 922 E. Colfax Avenue, South Bend, IN 46624.