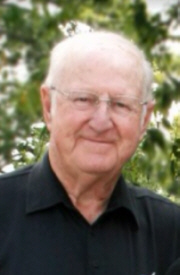 Everett D. Colvin, 85, passed away in his home due to natural causes with his loving wife and family by his side on the evening of Tuesday April 19, 2016.
Born in Chicago, Illinois on July 14, 1930, Everett was son of Walter and Louise A. (Rosenstiehl) Colvin. In 1934 his parents and he moved near Bourbon, Indiana then later moved to a farm near Culver, Indiana. He graduated from Culver High School in 1948. He then met a young lady by the name of Jayne I. Haag who later became his bride on September 9, 1951 in Tyner, Indiana.
He was employed by National Exterminators in 1952, which was owned by his father. With a vision and initiative, by 1958 he became the founder of Arrow Services Inc., a multi-state pest control company. Everett served on the board of directors and as a two term president for Indiana Pest Control Association. He was appointed by the Governor of Indiana to serve a three year term on the Indiana Pesticide Review Board, a committee to review current laws governing the use of pesticides.
Everett had served on the United Way board as campaign chairman, Vice President and President. He helped organize and respectfully served as the Vice President of the Marshall County Community Foundation and the Leadership Marshall County program. He was a lifetime member of the Plymouth Rotary Club, where he served as Vice President, President and International Rotary District Governor; He attended fifteen international conventions all over the world. He had served as President and on the board of directors of Hoosier Old Wheels (Antique Auto Club). In 1995 after 40 years of serving his community and surrounding areas, Everett retired as President of Arrow Services, Inc., but remained CEO until his final day with his family. In 1995, he started a new career with his wife, building a bed & breakfast and restaurant in Plymouth, to become known as Ev & Jayne’s Irish Inn and the Blarney Stone Restaurant.
His hobbies were collecting antique cars and restoring them, along with the desire to fly aircrafts and traveling the world. He enjoyed the beauty of the outdoors, taking on landscaping tasks and always held to the notion of working to accomplish something. For many years Everett was active in the Republican Party and a candidate for mayor of the city of Plymouth and Indiana State Representative.
He leaves behind his wife Jayne of 64 years and a son Dean A. Colvin of Plymouth and children: Ryan A. (Elizabeth) Colvin, Rachael (Bo) Hostetler, Stephanie Mae, Savannah Mae and Spencer Mae Croft. Son David L. (Susan) Colvin of Phoenix, AZ and their children; Jennifer, Elizabeth, Julie and Kathryn Colvin. Daughter Jayne Ann (Don E. II) Green of Plymouth and their children: Sara A. (Ron) Houin, Lara A. Green and Marisa A. Green. His 11 great-grandchildren are: Andrew, Mia, Hendrick, Harrison, Aiden, Isaiah, Weston, Journey, Jaden, Bronx, and SkiLer. Also surviving is his sister-in-law Roberta Colvin of Orlando, FL and numerous nieces and nephews.
He was preceded in death by his parents, brothers: Benjamin, Walter Jr. and Dr. Irving Colvin, and sisters, Louise Hindman and Katherine Reeve.
Visitation will be from 4-8 p.m. on Friday, April 22, 2016 in the Johnson-Danielson Funeral Home, 1100 N. Michigan Street, Plymouth.
Funeral services will be held at 11 a.m. on Saturday, April 23, 2016 in the funeral home with Rev. Tom Padberg officiating.
Entombment will be in the Colvin Family Mausoleum at New Oak Hill Cemetery in Plymouth.
In lieu of flowers, memorial contributions can be made to the Plymouth Rotary – Everett & Jayne Colvin Vocational Scholarship Fund, Center for Hospice – Marshall County 112 S. Center Street Suite C Plymouth, IN 46563, or the Humane Society of Marshall County P.O. Box 22, Plymouth, IN 46563.