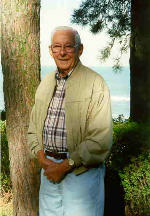 Everett E. “Pat” Miller, 86, a Plymouth resident for the past 62 years, living in River Park, 805 Baker St., Lot 7, since 1994, died of natural causes at 7:40 a.m. on Sat., June 1, 2002, in Saint Joseph Regional Medical Center, Plymouth. He was born in Mentone , Ind. , on July 18, 1915 , the son of Everett Earl and Marni E. Creakbaum Miller. Pat attended Beaver Dam High School . He served in the United States Army during World War II. He was first married, in Warsaw , Ind. , on Dec. 7, 1941 , to Virginia E. Zehner. Virginia died on Sept. 16, 1975 . Pat and Lois H. Greer were married in Plymouth on Nov. 4, 1984. From 1940 to 1954, Pat managed service stations in Plymouth . He then became a Marathon Oil agent dispensing bulk oil for home heating in the Marshall County area. He retired in 1989. No stranger to work of any kind, Pat was an energetic gardener, growing flowers and keeping a fastidious yard. He enjoyed athletic events and followed Plymouth sports. A member of the Trinity United Methodist Church , Pat was active in the Builders Sunday School class. He belonged to the Plymouth Kilwinning Lodge No. 149 and was a Past Master and a fifty-year member. He also was a member of the Scottish Rite – Valley of St. Joe and of the Maxinkuckee Odd Fellow Lodge, Culver. In addition, Pat was a member of the Eastern Star and was on the DeMolay advisory committee. Pat is survived by his wife, Lois, and by two sons, one daughter and their families. His sons are: Lewis E. and Donna Miller, Noblesville , Ind. , and their children: Matthew Miller of Noblesville, and Scott and Aaryn Miller, Indianapolis . A great-grandson, Jaden Miller, son of Scott and Aaryn, also survives. Jay A. and Gail Miller, Plymouth, and their children, Gene and Traci Renihan, Avon, Ind., and Patrick and Joseph Miller, Plymouth, survive as well. Pat’s daughter Kay E. and Scott Miller, Plymouth, and their children, William, at home, and Gabriel and Sarah Miller, also survive. In addition, step-son Jim and Judy Greer and their children, John and Krista Greer and great-granddaughter, Kasey, all of Plymouth , and step-granddaughter, Janet Greer, Indianapolis , survive.
Pat’s sisters-in-law, Joy Miller, Warsaw, Ind., and Doris Emmons, Plymouth, are survivors as well. Pat was preceded in death by his parents, his first wife, a daughter, Kris A. Ethier and many brothers and sisters. The family will welcome friends to a celebration of Pat’s life at the Johnson-Danielson Funeral Home, 1100 N. Michigan St. , Plymouth , on Monday, June 3, 2002 , from 2 to 8 p.m. Masonic Rites will be held at 8 p.m. Funeral services for Pat will be at 10:30 a.m. on Tuesday, June 4, 2002 , in the funeral home. The Rev. Maurice Grindle, pastor of the Trinity United Methodist Church , will officiate. Burial will be in New Oakhill Cemetery , Plymouth . Memorial gifts in Pat’s memory may be made to the Trinity United Methodist Church .