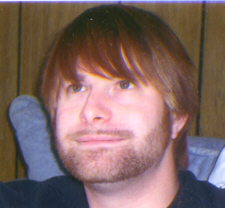 Ezekiel “Zeke” Hutchings, 384 Pinewood Drive, Valparaiso, died at 4:30 a.m. on Thursday, January 12, 2006. As a result of an automobile accident at the intersection of U.S. 6 and LaPorte County Road, 600 West.
Zeke, a vibrant, talented young man with hosts of friends, was only 25 years-old.
He was born in Plymouth, Ind., on March 24, 1980. The son of David and Glenda Williams Hutchings. He attended Plymouth schools, Louisville, Kentucky, schools and also attended Valparaiso High School. He finished his education in the Job Corps in Wisconsin.
A construction worker, most recently, Zeke worked for Monaco R.V.s in Wakarusa, Ind.
He considered himself an entrepreneur. About the only thing he loved more than getting a new job – was quitting one to find another. This pursuit led him to construction and working with his hands, being his found passion.
He was musical and played the drums and the guitar. He loved skateboarding, four wheelers, dirt bikes and the Chicago Bulls. He enjoyed playing pool with his friends, video games and music of all kinds.
Zeke is survived by his parents, David Hutchings, Plymouth, Ind., and Glenda Hutchings, Portage, Ind., and by his fiancée, Cari Daniel of Valparaiso.
His two young sons and daughter, Skyler and Nathaniel Hutchings and Cailee, also survive.
Two sisters: Jessica Hutchings, Plymouth and Shai Hutchings, Lakeville, Ind., survive as well together with Danny Harmon, Knox, his biological father: Esther Williams, his maternal grandmother, Plymouth: Ada Petill, his paternal grandmother, also of Plymouth; three Aunts: Shari and Jerry Johnson of Ormond Beach, FL, Amonda and Bob Moon and Kim and Jim Evans, all of California, and several nieces and nephews.
Zeke was preceded in death by Harold Williams, his maternal grandfather.
Friends will be welcomed by the family for the following: on Sunday, January 15, 2006, from 3 to 7 p.m, E.S.T. in the Johnson-Danielson Funeral Home, 1100 N. Michigan St., Plymouth, Ind.
For funeral services for Zeke in the funeral home on Monday, January 16, 2006, at 11 a.m. E.S.T. Pastor Darrell Cardwell, of the North Salem Church of God will officiate.
For graveside services at Calvary Cemetery, Portage, Ind. At 3 p.m. E.S.T.
Memorial gifts to a trust fund in his children’s names will be appreciated and treasured by Zeke’s family.