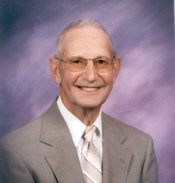 F. Hayden Patz, 81, died following a lengthy illness at his residence on Sunnyside Drive, Plymouth, at 12:15 a.m., Friday , November 28, 2003, under the loving care of his family and hospice. Hayden had been a Plymouth resident since 1953.
Born on October 4, 1922, in Lowell, Ind., Hayden was the son of Frank and Lyvah Hayden Patz.
He was a 1940 graduate of Lowell High School, and after serving in the U.S. Navy Sea-Bees during WW II graduated from the University of Wisconsin.
On September 1, 1945, Hayden and Dorothy G. “Dottie” Hathaway were married in Lowell, Ind.
Hayden was the owner-operator of Plymouth Dairy from 1953 until he retired in 1981.
He was a member of the First United Methodist Church, Plymouth; Past Master of the Plymouth Kilwinning Masonic Lodge #149 F & AM; Scottish Rite Valley of South Bend; Orak Shrine of Michigan City; the Plymouth Elks Lodge; and the Plymouth Moose Lodge #741. Hayden also had been Toastmaster of the Plymouth KiwanisClub, a Plymouth Volunteer Fireman for 12 years, and had been on the original Board of Directors of the Marshall-Starke Development Center.
Hayden is survived by Dottie, his wife of 58 years, two daughters: Christine and John Amones of Sturgis, Mich., and Dennise and Mike Ellinger of Fort Wayne, Indiana.
Six grandchildren, 5 great-grandchildren, and a sister, Evelyn Brakel of Merrillvile, Ind., also survive.
His parents, a daughter Patti, and a sister Kay Woodke preceded him in death.
Visitation with the family will be held from 4 to 7 p.m. on Sunday, November 30, 2003 in the Johnson-Danielson Funeral Home, 1100 N. Michigan St., Plymouth. A Masonic Rite service will be held at 7:00 p.m., in the funeral home.
Funeral services will be held at 10:30 a.m. on Monday, December 1, 2003, in the funeral home. Dr. E. Dean Fager of the First United Methodist Church will officiate.
Burial will be at 3:00 p.m. E.S.T. in West Creek Cemetery, Lowell, Ind.
Memorial gifts in Hayden’s name may be made to the Marshall County Hospice, or the First United Methodist Church.