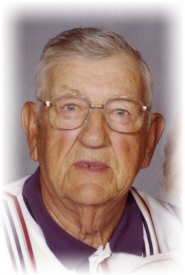 Fawn Joseph Fritz, 85, died at 7:15 p.m. on Thursday, August 31, 2006, in Memorial Hospital, South Bend, from complications of a sudden stroke on Tuesday, August 15th. He had been a South Bend resident for over 50 years, having moved there from Plymouth.
The son of William Charles and Mary Etta Gilvin Fritz, Fawn was born at home in Plymouth on September 11, 1920. He had attended South Bend Schools.
On May 23, 1953, Fawn and Alyce M. Baker were married in Constantine, Michigan.
Fawn had worked for Shippers Dispatch and then Tucker Freight, retiring in 1983. He worked in maintenance, and could repair anything from plumbing to electrical.
As a hobby he cut and sold split wood for many years, he also appreciated old tractors which he put to good use. Fawn also enjoyed watching his brothers Dallas and Don operate heavy equipment. He liked basketball, was a big joker, and had a great sense of humor. He played guitar and sang in Church Quartets with Don and Jack Miller. He attended the Missionary Church at Pleasantview and Hillside.
He is survived by Alyce, his spouse for 53 years, a son Kenneth R. and Vicki E. Fritz of South Bend and their children: Zachary, Lucas, Heather and Caleb and a daughter, Sharon M. and Ron E. Hootman of Ft. Wayne and their children: Scott, Jeff and Kristin.
Also surviving are two sisters: Bonnie and Tom Sweet of Mishawaka, Norma and Don Kizer of LaPaz, a brother, Don and Marylou Fritz of Plymouth, along with numerous nieces and nephews.
Fawn was preceded in death by his parents, three brothers: Dallas, Glen and infant Hallas, a sister Wanda, and a half-brother Chester Fritz.
Friends are invited to visit with the family and share memories of Fawn on Monday, September 4, 2006 from 4 to 8 p.m. at the Johnson-Danielson Funeral Home, 1100 N. Michigan Street, Plymouth and after 7 a.m. Tuesday until time of services
Funeral services for Fawn will be held at 10:30 a.m. on Tuesday, September 5, 2006 in the funeral home. Pastor Robert Miller of the Crest Manor Church of the Brethren will officiate.
Burial will be in Oakhill Cemetery, Plymouth.