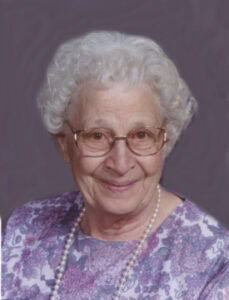 Fern Nifong, 89, a lifetime Marshall County resident, formerly of Juniper Road, Argos, Indiana, died of natural causes at 6:00 p.m. on Tuesday, July 26, 2011, in Millers Merry Manor, Plymouth, Indiana.
Fern was born in Marshall County on May 28, 1922. She was the fourth child of seven children born to Frederick and Dora Hissong Neidlinger.
Fern started school at Inwood. She then went to the old Washington School and graduated from Lincoln High School in 1940. She played the violin in the high school orchestra.
During the 1940’s, she worked at the F.H. Burnham Glove Factory and was an office girl for Dr. L.W. Vore. She was also employed at Meck Industries on Pennsylvania Avenue, all at Plymouth.
Earl “Happy” Nifong and Fern were married on December 10, 1944, in the Plymouth Church of the Brethren.
They started farming on shares at the old Lemert Sale Barn farm north of Plymouth. In 1946, they moved east of Plymouth to Fred Neidlinger’s farm. Five children were born in the big house.
In 1955, the Nifongs had a public sale and then bought a farm east of Argos. A homemaker, Fern also worked from 1960 to 1984 at Hart Schaffner and Marx as a seamstress in Rochester. Fern is survived by two daughters and two sons. Her daughters are Reta Kaye (Charles) Middaugh, Argos and Rose Marie (Tom) Feeney, Indianapolis. Her sons are Devon Earl (Deb) Nifong, Argos and Kenny Leroy (Linda) Nifong, also of Argos.
Nine grandchildren survive together with two sisters: La Vanch Yarian of Bremen and Mary Ann Austin of Yerington, Nevada. Two brothers, Orland P. (Eloise) Neidlinger of Winter Park, Florida and Dale L. (Mary Jane) Neidlinger of Plymouth, survive as well.
The grandchildren and their families are: Andy (Mandy) Nifong and their children Bailey J. and Owen;Sarah (Earl) Betz and their children Tyler, Payton and Braxton: Emily (Mike) Fishburn and their children Douglas, Coleman, Beau and Stephen; Ryan Nifong and his son Caden; Katie (Joel) Harman, all of Argos, Phil (Barb) Middaugh and their children Bailey A. and Rachael; Cheryl (Sam) Fenton; John (Shelley) Feeney and their daughter Ainsley and Mary Feeney, all of Indianapolis. Fern was preceded in death by her parents, her beloved husband, Earl, who died on March 6, 2009, an infant son, Allen Leon, a sister, Margaret Leeper and a brother, Russell L. Neidlinger. Friends may call at the Johnson-Danielson Funeral Home, 1100 North Michigan St., Plymouth on Monday, August 1 from 4 to 8 p.m. and on Tuesday, August 2 at the Church for one hour prior to the services.
Funeral services for Fern will be held on Tuesday, August 2, at 2:00 p.m., at the Plymouth Church of the Brethren, 1130 N. Michigan St., Plymouth. Funeral services will be officiated by the Rev. Ruth Yoder, Pastor of the church.
Burial will be in New Oakhill Cemetery.
Memorial gifts in Fern’s memory may be made to the Church of the Brethren.