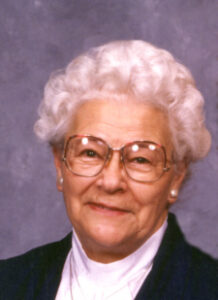 Fern Tressa (Landis) Kilian, 88, passed into the presence of her Lord and Savior Jesus Christ on Sunday, May 14th at the Bremen Health Care Center. She was born April 23, 1918 in Detroit, Michigan to Alta (Tavernier) and Edgar Landis, the second child and oldest of the remaining seven children.
On October 14, 1937 she married Richard C. Kilian and they had one child, Luella. In 1942, after Richard and Fern were born again, Richard felt called to go into the ministry and the family moved to Chicago, Illinois. They both attended Moody Bible Institute, where in April 1947 Richard graduated. They began their full-time ministry in Whiting, Indiana and served churches in Indiana and Illinois for over 40 years.
The next 10 years was filled with traveling from coast to coast in evangelistic meetings until Richard’s health began to fail and they were established in Elkhart. Fern’s work with the women in the churches was concentrated on teaching them to serve with their families in their own church and to supply the missionaries on the fields with household and personal items. Her enthusiasm was contagious and her love for each work was evident in her relationships with the ladies.
On October 11, 1997 Fern suffered an aneurism and was eventually placed with Richard in the Bremen Health Care Center. The family was told if she survived, she probably wouldn’t be mobile nor communicative. God performed a couple of miracles and by 1999 she was back on the piano bench at the nursing home, playing for the residents before meals.
Richard passed into the presence of the Lord in November of 2000 and Fern continued with her ministry of reading morning devotions over the intercom at the nursing home, playing the piano at mealtime and playing between Sunday School and Morning Worship at First Baptist Church where she was a member.
Fern will be greatly missed by her family and friends as well as the nurses and staff at the Nursing Home. Her daily “Blessings on you” to all who passed by her, will also be missed.
Survivors include her daughter, Luella Jensen, her six “great” grandchildren; Mark (Jennifer) Jensen of Granger, Donn (Anna) Jensen of Bremen, Michelle (Bill) Lemke of Chesapeake, Va., Derek Jensen of Bremen, Amy (Todd) Hundt of Bremen, Kara (Thad) Kovach of Bremen, 13 great grandchildren and many nieces and nephews. Also surviving are one sister; Bonnie (Keith) McCollough, two brothers; Delvin (Ruth) and Gene (Joan) Landis and one brother-in-law; Evan Emerson all of Elkhart. She was preceded in death by her husband, two sisters; Norma Landis and Ardis (Evan) Emerson, two brothers; baby Orland and James (Betty) Landis.
Friends may call Thursday May 18th from 4 – 7 p.m. in the First Baptist Church, 414 E. Lincoln St., Bremen, Indiana and again on Friday, May 19th for one hour before services. Services to celebrate her life will begin in the church at 11 a.m. Friday with Pastor Jerry Smith officiating. Burial will follow in the Bremen Cemetery. Memorial gifts may be made to the First Baptist Church.