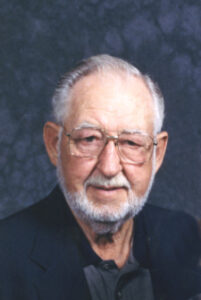 Ferry “F.J.” Collins, 84, 873 Wilson Circle, Plymouth, died, following an extended illness, at 7:47 a.m., on Thursday, June 7, 2007, in Saint Joseph Regional Medical Center, Plymouth.
A longtime Muncie resident, Ferry had lived in Plymouth, coming from Indianapolis, since 1982.
He was born on March 27, 1923, in Freetown, Indiana, the son of Ivor J. and Fay Phillips Collins. He graduated from Muncie Burris High School with the class of 1941.
A Master Sergeant in the United States Army during World War II, F.J. served in the infantry from 1943 to 1946 with Patton’s 3rd Army.
On June 15, 1974, F.J. and Carol “Sue” Irwin were married in Muncie, Indiana.
A District Plant Manager for Indiana Bell, Indianapolis, with 41 years of service, he retired in 1982 and was a member of the Telephone Pioneers.
A dedicated outdoorsman, he enjoyed hunting and fishing trips to Canada with family and friends. He also engaged in those sports locally as well as gardening, playing golf and woodworking projects. He was admired by his family for his great work ethics, his energy and his drive.
Ferry is survived by his wife, Sue and by five children and five step-children.
His children are daughters: Alpha M. Collins and Melanie I. (Joe) Alexander and sons: Alan R. (Becky) Collins, Chris L. (Sharon) Collins, all of Plymouth and Ryan I. (Dianna) Collins, Culver, Indiana
Four step-sons are Ron E. Collins, Fort Lewis, Washington: Dean G. (Anita) Collins, Pittsboro, Indiana: D. Shane (Chris) McClellan, Hurst, Texas: Jim P. (Lori) McClellan, Plymouth, Indiana. His step-daughter is Theresa L. “Teri” McClellan, Coeur D Alene, Idaho.
Twenty-seven grandchildren, 17 great-grandchildren –with a new arrival expected soon—also survive together with three sisters. They are Carol Warner, Heartland, Michigan, Kay (Robert) Butler and Peggy Armstrong, both of Muncie, Indiana.
Numerous nieces and nephews survive as well.
Ferry was preceded in death by his parents and one sister, Kathleen Jeep.
Friends are invited to celebrate Ferry’s life and share memories with his family on Sunday, June 10, 2007, from 3 to 7 p.m. and after 7 a.m. on Monday, June 11, at the Johnson-Danielson Funeral Home, 1100 N. Michigan St., Plymouth, Indiana.
Funeral services will be at 11 a.m. on Monday, June 11, 2007, at the funeral home with his nephew; Father Kevin Warner and son, Ron Collins, will officiate.
Military honors at the New Oakhill Cemetery will be provided by Plymouth American Legion Post 27.
Memorial gifts may be made to the American Cancer or American Lung Associations.