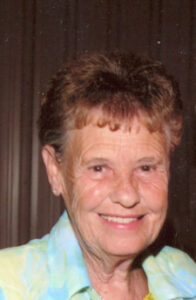 Florabelle J. “Sis” Berger, 1728 Westgate Ave., Plymouth, died in her home of natural causes at 2:35 a.m. on Thursday, April 6, 2006.
Sis, as she was always affectionally known, was 77 years old.
Born in Toledo, Ohio, on March 14, 1929, Sis was the daughter of Cecil Leo and O. Pauline O’Hern Sloan. The family moved to Plymouth in 1947 and Sis graduated from Plymouth High School that year.
In 1947, in Angola, Indiana, Sis and William J. Berger were married. William died in 1972.
With Pauline, her mother, Sis operated the popular Sloan’s Dress Shop in Plymouth for 28 years – from 1947 until 1975. For 18 years, she was also a Jesse Corp. Special Education Aide.
She loved to read and to travel.
For a number of years, she assisted with the Miss Plymouth Pageant.
A former member of the Women of the Moose, Sis enjoyed being with her friends.
Sis is survived by three sons and a daughter. Her sons are Michael S. and his wife, Tyla Berger of Fairfax, Virginia; Patrick W. and Susan Berger of Greenwood, Indiana and Kevin A. Berger of Indianapolis, Indiana.
Her daughter and her husband, living in Spencer, Indiana, is Becky S. and Warren Beaman.
Thirteen grandchildren, eleven great-grandchildren and one great-great-grandchild, together with several nieces and nephews also survive Sis’ death.
She was preceded in death by her parents and by one brother, Charles Sloan.
Friends will be welcomed to celebrate Sis’ life at the Johnson-Danielson Funeral Home, 1100 N. Michigan St., Plymouth, on Sunday, April 9, 2006, from 1 to 2 p.m. A memorial service for Sis will follow visitation at 2 p.m. in the funeral home.
The Rev. Charles Krieg, pastor of the Salem United Methodist Church, Bremen, will officiate.
Interment will be in New Oakhill Cemetery.
Memorial gifts in Sis’ memory may be made to the United Way of Marshall County, 2701 N. Michigan St. Plymouth, IN 46563.