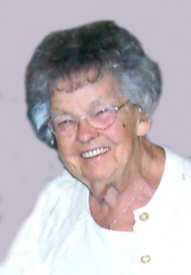 Flossie V. Tyson, 95, passed away on May 6, 2015, after she lost her 5 month battle with cancer, surrounded by her loving family in The Whitlock Senior Apartments in Bremen. Flossie was born on May 19, 1919 in Saskatchewan, Canada to Francis and Hattie (Bickle) Coonfare She came to Indiana at age 3 and lived in Marshall County for 50 years before moving to North Judson in 1986, and finally living in Bremen for the past year.
She would marry Russell Heminger who would precede her in death in 1990. On June 14, 1986, Flossie became the bride of Norman Tyson in the English Lake Church in North Judson. He would precede her in death in 2005.
She worked for Norwesco as a press operator for 17 years before her retirement. Flossie made over 300 quilts and made cabbage patch dolls. She even won a prize with her Mr.T doll. She liked to do upholstery work and going fishing. She treasured memories made with her family, and love baking bread, cinnamon rolls and making candy for her family and friends. She was a great gardener and liked to can food. Flossie loved people and would always invite anyone into her home, especially for the holidays. But above all, she was the perfect mother and grandmother.
Flossie is survived by her children: Carl Heminger of Winamac, Norma (Ted) (Sickman) Nitz of Bremen and Danny Heminger of North Judson. Also surviving are 11 grandchildren, 18 1/2 great-grandchildren and 8 1/2 great-great grandchildren. Flossie was preceded in death by her parents; husbands, Russell Heminger and Norman Tyson; son Arthur; infant daughter Wanda; an infant grandson; and her 12 siblings.
Visitation will be from 5-8 p.m. EDT on Friday, May 8, 2015 in the Johnson-Danielson Funeral Home, 1100 N. Michigan Street, Plymouth. Visitation will resume one hour prior to the service in the church.
Funeral services will be at 11 a.m. EDT on Saturday, May 9, 2015, in the English Lake Church, 2750 S 650 W, North Judson, Indiana 46366.
Burial will be held in the Oakhill Cemetery at 2 p.m. EDT on Saturday.
In Lieu of flowers, Memorial contributions can be made to Center for Hospice Care 112 S. Center St. Plymouth IN 46563 or to the English Lake Church.