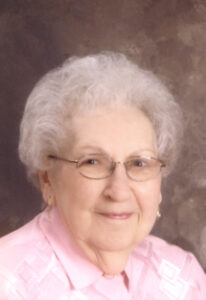 Floy Marie Mayer, 83, of 805 Baker St., Lot 73, died of natural causes at 6:04 a.m. on Monday, January 8, 2007, in the Saint Joseph Regional Medical Center, Plymouth, Indiana.
Born in Hillsboro, Illinois, the daughter of Eury B. and Floy Belle Cannon Strange on August 7, 1923, Floy graduated from Hillsboro High School with the class of 1941.
On February 21, 1943, she and Charles J. “Chop” Mayer were married in Hillsboro.
Later, he and Floy, lived in Saginaw, Michigan, the national headquarters of Wickes Corp, where Chop worked in the electrical and heating division. The Mayers, still with Wickes, moved to Plymouth in 1972. In 1980 they bought Delp Electric and opened Mayer Plumbing and Heating, operating the business for over 14 years.
Floy was an excellent bridge player and she enjoyed that game as well as many others. A great cook, she was also a skilled seamstress. She helped to edit her son John’s books and learned –late in life—to master the computer.
She is survived by “Chop,” her husband of nearly 64 years and by their daughter, Barbara J. Way of Saginaw, Michigan.
A sister, Jeri Landholt of Plymouth and a grandson Jason Way together with his girlfriend, Heather Hubbard, of Los Angeles, California, granddaughter, Mandy Patterson and her husband Nick of Saginaw, Michigan. Loretta Strange, a sister-in-law, of Chattanooga, Tennessee, also survives.
Floy was preceded in death by her son, John R. Mayer: a son-in-law, John M. Way: a brother and sister-in-law, Reginald and Margaret Strange: a brother, Elston Strange: and a brother-in-law, H. Byron Landholt.
Friends will be welcomed to celebrate the life of Floy Mayer with her family on Thursday, January 11, 2007, from 10 a.m. to noon at the First Presbyterian Church, 401 N. Walnut Street, Plymouth.
A Memorial Service for Floy will follow visitation at noon in the church where she was a longtime member. The Rev. Paul Nye, pastor of the church, will officiate.
Memorial gifts in Floy’s name may be made to the First Presbyterian Church.