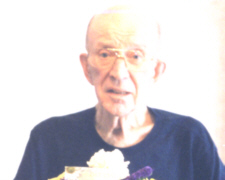 Forest V. “Frosty” Brundige, 82, Windmill Drive, Plymouth, died from an extended illness, at 9:40 a.m., on Monday, June 18, 2007, in the Catherine Kasper Life Center, Donaldson, Indiana.
Frosty was a resident of Plymouth until 1985, when he moved to Frostproof, Florida. He returned to Plymouth in February of 2005.
He was born in Plymouth on March 6, 1925, the son of Harry F. and Cecilia B. Hartman Brundige.
A 1943 graduate of LaPaz High School, he served his country during World War II in the United States Army as a postal clerk.
On December 16, 1944, in Plymouth, he was married to Donnajean Amones. Donnajean died in September of 1968. On April 26, 1969, Frosty and Darlene (Whitesell) Nelson were married in Plymouth.
Frosty worked at McCord’s from 1947 to 1966. He first worked in the shop, advancing to foreman. He then worked at Bomarko for three years, returning to McCord’s in 1969 as a buyer. He retired from the company 16 years later, in 1985.
Frosty enjoyed flower gardening and watching westerns on TV. He loved camping and traveling and country music.
He is survived by Darlene, his wife of 38 years and by a daughter, Connie and Cecil Ottow, all of Plymouth.
A step-daughter, Debra and Dick Stout, Red Lodge, Montana, and a step-son, Steven and Jane Nelson, Plymouth, also survive.
A grandson, Nickolas V. Ottow, Boulder, Colorado, and a granddaughter, Sarah R. Ottow, Boone, North Carolina, survive as well, together with a sister, Helen Haines, Plymouth, and two nephews, Tom Haines, Plymouth, and Harold Davidson, South Bend.
Frosty was preceded in death by his parents; his first wife, Donnajean; and two sisters, Ilene Davidson and Juanita Ivins.
Friends are invited to celebrate Frosty’s life with his family at the Johnson-Danielson Funeral Home, 1100 N. Michigan St., Plymouth, on Thursday, June 21, from 4 to 7 p.m. and after 7 a.m. on Friday.
Funeral services for Frosty will be held in the funeral home on Friday, June 22, 2007, at 10:30 a.m. The Rev. Tom Padberg, chaplain of the Center for Hospice and Palliative Care, will officiate.
Interment will be in, New Oakhill Cemetery, Plymouth, where Military Honors will be provided by members of the V.F.W. Post 1162 and American Legion Post 27.
Memorials in Frosty’s memory may be sent to the Center for Hospice and Palliative Care or the Catherine Kasper Life Center.