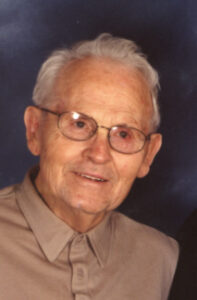 Forrest Bailey, 85, a former Argos resident, passed away at 2:15 P.M. on Tuesday, December 10, 2013, in Miller’s Merry Manor, Plymouth following an extended illness.
The son of Sebern and Icie Bradley Bailey, Forrest was born on March 22, 1928 in Decoy, Kentucky.
He had resided in the communities of LaPorte and Knox prior to moving to Argos in 1969.
On July 23, 1949, Forrest and Delores M. Fisher were married in Knox. Delores passed away on January 20, 1990. On April 24, 2004, he married Mary L. (Middaugh) Wagoner in Argos.
Forrest served in the U.S. Army during the Korean Conflict. After attending trade school, Forrest had worked as a pressman for Plimpton Press in LaPorte and Indiana Press in Plymouth. He later owned Bailey’s Sales and Service in Argos. Forrest was also respected for the heating and cooling trade. He was always building something out of nothing and was known at “Mr. Fix It”.
He and Mary attended New Song Church in Plymouth and was a prayer warrior for many.
He enjoyed spending time with his grandchildren and playing the harmonica. Forrest is survived by his wife, Mary, daughter, Gail G. (Steven) Dimmitt of Argos and son, Calvin R. Bailey of Plymouth, ten grandchildren include: John Dimmitt, Stacey (Joel) Thomas, Luke Dimmitt, Grant Dimmitt, Ali Dimmitt, Darci Dimmitt, Dalton Dimmitt, Chelse Bailey, Zachary Bailey and Max Bailey; sisters: Marie (Bob) Burrous of Peru, Ivory (Cecil) Mann of Winamac, Sharon (Nathan) Marcum of Knox and; brothers: Ray (Rachel) Bailey of Bradenton, FL Troy (Frieda) Bailey and Beech (Linda) Bailey, both of North Judson; sister-in-law, Joy Bailey of Knox; brother-in-law, Rich Jenson of Monterey; along with several nieces and nephews. He was preceded in death by his parents, his first wife, Delores; a son, John Jay Bailey; sisters, Lassie Clemens and Betty Jenson; and brothers: Carl, Coaet, Eddie and Morris Bailey.
Friends may visit with Forrest’s family from 2 to 5 p.m. EDT on Sunday, December 15, 2013 in the Johnson-Danielson Funeral Home, 1100 N. Michigan St., Plymouth
Funeral services will be held on Monday, December 16, 2013 in New Song Community Church 410 N. Kingston Road, Plymouth at 11:00 a.m. EDT. where calling will continue one hour prior to services. Pastor Justin Chambers of New Song and Rev. Ed Hasnerl of Eagle Creek will officiate.
Interment will be in Maple Grove Cemetery, Argos with military honors provided by members of the Plymouth American Legion Post 27, Veterans of Foreign Wars – Marshall County Post 1162 and the D.A.V.
Memorial gifts in Forrest’s memory may be made to New Song Church or Child Evangelism Fellowship, North Central Chapter, P.O. Box 54, Argos, IN 46501.