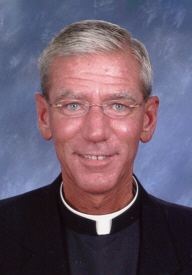 Fr. Jeffery A. Largent, 59, longtime pastor of St. Mary of the Lake Catholic Church in Culver, passed into the arms of a loving Savior on Thursday evening at his Culver home. He died peacefully surrounded by his close friends.
Priests are called to the religious life and are dedicated to the propagation of the Catholic Faith by making the Sacraments available to their congregations. Fr. Jeff never lost sight of that promise and performed the Sacrament of Baptism from his own hospital bed just last Sunday. His memory will live on in the many lives he has touched over his 32 years in the priesthood.
He was born Jeffery Alan Largent on June 23, 1957 in South Bend, Indiana the first of four children of Arthur A. and Florence J. (McGreevey) Largent.
Jeff had a childhood like many others and attended primary school at St. Anthony and graduated from John Adams High School in 1975 where he was involved in theater and drama and become the only seminarian in the Fort Wayne/South Bend Diocese at that time to graduate from a public School. He said he knew from around the time he was in the third grade that he wanted to be a priest and showed his interest by responding to the Augustinian Priests, based in Holland, Michigan and sharing his desire with them.
He then completed college course studies at IUSB and then entered the St. Gregory Seminary in Cincinnati, Ohio. He also studied at the North American College in Rome, Italy and was privileged to be an altar server for St. John Paul II. He later returned to Rome in 2014 for a sabbatical and enjoyed his time there reconnecting with the locals that remembered him still after so many years. He was ordained to the Priesthood on August 4, 1984 in St. Matthew Cathedral, South Bend, Indiana by then Bishop William McManus, Ft. Wayne/South Bend Diocese. He was employed as a Principal, Teacher of Theology and Parish Priest. Through the years he has been assigned and served the following parishes: St. John the Baptist â€“ Ft. Wayne, St. Mary â€“ Decatur, St. Andrew/St. Hyacinth â€“ Ft. Wayne, St. Patrick â€“ Ft. Wayne, St. Rose â€“ Monroeville, St. Thomas the Apostle â€“ Elkhart, St. Monica â€“ Mishawaka, Little Flower â€“ South Bend, and a rare re-appointment to St. Mary of the Lake â€“ Culver. It was there he considered home due to the many wonderful friendships he was able to make and retain over the years.
Fr. Largent also served as Chaplain of the Indiana State Police for many years fostering many long lasting friendships as well.
He enjoyed spending time with his many friends, boating, horseback riding and cooking. As an avid dog lover, he was part of the Airedale Rescue and enjoyed the three Airedale he adopted: Luke, Jake and Rockne, who are now deceased and had just recently, added a Welsh Terrier Lydi.
Father is survived by his mother, Florence J. Largent of South Bend, brother Steve Largent of South Bend, sister Nancy (Chuck) Largent-Campbell of Powell, Ohio, and David (Carol) Largent of Kennesaw, Georgia. Seven nieces and nephews also survive. He was preceded in death by his father Arthur.
Visitation will begin on Sunday, September 11th at 2 p.m. in the St. Mary of the Lake Catholic Church, 124 College Ave., Culver, Indiana and will conclude with a Prayer Service at 6 p.m. Visitation will continue on Monday, September 12th from 10 a.m. until 4:30 p.m. in the church. The Rosary will be prayed at 4:30 p.m.
A Mass of Christian Burial will be celebrated by the Most Reverend Bishop Kevin C. Rhoades at 11 a.m. Tuesday, September 13th in the Culver Military Academy Chapel 1300 Academy Road in Culver.
Burial will follow in the Culver Washington Cemetery.
In lieu of flowers, memorial gifts may be made to St. Mary of the Lake Church, 605 N. Plymouth St., Culver, IN 46511.