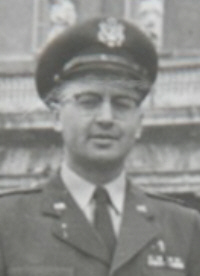 Rev. Roman J Schaefer, Colonel, USAF, Retired, 96, died Saturday, May 19, 2012 at Catherine Kasper Life Center in Donaldson, IN.
Fr Schaefer was born in Nicollet County Minnesota February 14, 1916 the son of Leo and Amelia (Bushard) Schaefer.
He attended Holy Trinity School in New Ulm MN and entered St Paul Seminary in St Paul MN. He was ordained a priest on June 2, 1942. His first Mass was at Visitation Church on the Fort Road in rural Nicollet County. After 2 years at St. Agnes in St. Paul, he entered the Army Air Corp and attended Chaplain School at Harvard University. He was in WW II in Bavaria near Munich from 1946 – 1950. He served as chaplain at several bases during his 25 years in the Air Force ministering to soldiers and their families in two other foreign wars: the Korean Conflict while in Yukota Japan and the Vietnam Conflict when based in Guam. His last assignment was at Vandenberg AFB, California, retiring as Colonel in 1969. He then returned to the Diocese of New Ulm, MN where he was the pastor at St Andrews Parish in Fairfax, MN. During his years in the Diocese he was active in veterans groups starting in Fairfax with the VFW and Legion, the Minnesota VFW as Chaplain and was later elected National Chaplain of the VFW. He viewed this continued service as his responsibility for freedom.
He retired to Florida and served as a priest in residence at Our Lady Queen of Martyrs in inner city Ft Lauderdale for 19 years. Moving to Catherine Kasper, Donaldson IN in 2005 where his retired sister, Sr Sharon Schaefer (P.H.J.C.) lived, she preceded him in death in 2010. He was loved by the sisters of Poor Handmaids of Jesus Christ as one of their own. The staff at Catherine Kasper enjoyed caring for him. The family wishes to thank the Disabled Veterans Chapter 42 for their friendship and faithful visits to Fr Schaefer. Fr Schaefer was an avid pilgrimage leader, serving as chaplain for many pilgrimages to Marian shrines around the world, to Rome and the Holy Land. He lived with a deep faith, active prayer life and prayed the rosary daily with great devotion to the Blessed Virgin Mary. During his many years as a chaplain, a diocesan pastor and in his active retirement in Florida, he ministered to thousands of Catholics. No doubt during his 70 years of priestly service, he anointed thousands and heard many last confessions. All those whom he touched spiritually who have passed on, now welcome him in the next life. We commemorate his 70 years as a priest, friend, uncle and pray warrior in faith. May he rest in peace in our Holy Mothers arms in God’s abundant love this day. He is survived by one sister, Mrs. Aurelia Boettger of New Ulm, MN. Preceding him in death include his parents and brothers: Herbert, Lawrence, Henry, Leo and James; his sisters Ester, Amelia and Sharon (Ruth). Visitation will be held from at 9 to 11 a.m. on Tuesday May 22, 2012, at Catherine Kasper Life Center Chapel, 9601 S. Union Road, Donaldson IN. Followed by a Mass of Christian Burial at 11:15 a.m. The Rev. Fr. Michael Winkowski will officiate. A meal being served immediately after.
In lieu of flowers, memorials are suggested to Poor Handmaids of Jesus Christ, P.O. Box 1 Donaldson, IN 46513.
The following arrangements will occur in Minnesota:
Visitation will be held on Friday May 25, 2012 from 9:30 to 10:30 a.m. at St Andrew Church, Fairfax, MN. with the Most Rev. Bishop John LeVoir celebrating a Mass of Christian Burial at 10:30 a.m. A lunch will be served following Mass.
Interment will be at 1:30 p.m. with military honors in the Catholic Church of the Visitation Cemetery, Nicollet County, MN; Fort Road at Swan Lake.
In lieu of flowers, memorials are suggested to the St Andrews Church, Fairfax, MN
Local arrangements by Schmucker Funeral Home, New Ulm, MN. (507)354-8125