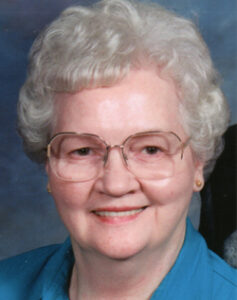 Frances â€œFranâ€ C. Keister, 87, of Plymouth, passed away peacefully Tuesday, April 24, 2018 in the Millerâ€™s Merry Manor, Plymouth.
Fran was born in Jackson, Kentucky, the daughter of Perry Henderson and Margaret (Mullins) Stacy.
Fran graduated in 1948 from North Judson High School.
On October 25, 1952, in Knox, she married James â€œDonaldâ€ Keister, he preceded her in death on September 2, 2012.
Fran loved playing bridge, doing needle point, cross stitch, ceramics and crossword puzzles. She was a member of the First United Methodist Church and an Alumni of Delta Theta Tau Sorority.
Fran worked several jobs including, a teacherâ€™s aide at Old Washington School, Sears, Treasurer and bookkeeper at the Plymouth High School, bookkeeping at Keisterâ€™s Oil Company, and retired from the Marshall County Treasurer Office.
Surviving are her two sons, six grandchildren and seven great-grandchildren. They are: Jim (Linda) Keister of Plymouth, and their children: Brandon (Jillian) Keister of Plymouth, and their daughter: Arianna, Eric Rubesha of Plymouth, Laurie (Joe) Hayes of Valparaiso, and their children: Liam and Kari, Son: John (Beth) Keister of Vernon Hills, Illinois, and their children: Sarah (Dan) Armstrong of Libertyville, Illinois, and their children: Milo and Bea, Greta (Brad) Mann of Wauconda, Illinois, and their children: Natalie and Audrey, Mary Keister and her husband, Peter Nencka of Columbus, Ohio. Also surviving is a brother: Perry H. (Priscilla) Stacy of Lafayette, sister: Gladys (Robert) Stacy of LaPorte, along with many nieces and nephews. Fran was preceded in death by her parents, husband, two sisters; Polly Stacy, Janice Howard and three brothers; Grover, J.B., and Paul Stacy, three brothers-in-law: Robert Stacy, Thurman Stacy, Clifton Howard, two sisters-in-laws: Marvelene Stacy and Carol Stacy.
Visitation will be held on Friday, April 27, 2018 from 11-1 p.m. in the Johnson-Danielson Funeral Home, 1100 North Michigan Street, Plymouth. Funeral services will at 1 p.m. Friday, with Rev. Toni L. Carmer of the First United Methodist Church officiating.
Burial will be in the New Oak Hill Cemetery.
Memorial contributions may be directed to either the First United Methodist Church, 400 North Michigan Street, Plymouth, Indiana 46563 or to the Michael J. Fox Foundation for Parkinsonâ€™s Research, P.O. Box 5014, Hagerstown, MD 21741-5014.
The family wishes to express their appreciation and thanks to Millerâ€™s Merry Manor, for all the loving care and support during momâ€™s eight and a half years with them.