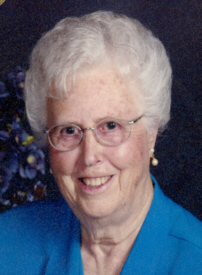 Frances “Joan” Freed, 92, a lifetime Marshall County resident, passed away at 2:40 p.m. on Friday, January 1, 2016 in the Pilgrim Manor Nursing Home, Plymouth.
The daughter of Russell L and Lucy M. (Coplen) Good, Joan was born in Argos, Indiana on October 11, 1923. She was a member of the Argos graduating class of 1941.
Joan married Ray A. Freed on October 21, 1945. Ray preceded her in death on October 27, 1989. To this union two children were born, Stephen and Beverly.
Joan had worked as the receptionist for Dr. Peterson, Dr. Guild and Dr. Vore for 23 years, retiring in 1986.
She was an active member of the First United Church of Christ in Plymouth, where she sang in the choir, was a member of the Mary Martha Circle, and helped many times with the bake sales and cookie walks. She was a member of the Golden Girls, a group of women friends, and an active volunteer at the Marshall County Historical Museum. Among her hobbies, Joan was making items from plastic canvas for her church bazaars.
A special thank you to the staff that helped care for Joan, and friends that Joan made at Pilgrim Manor Nursing Home
Joan is survived by her son, Stephen and Velma Freed, of Plymouth; granddaughters: Angie Comer, Christina (Johnathan) Bednarski, Samantha Freed and Lindsy (Randy) Nichols; and 5 great-grandchildren; and sister-in-law Eloise Good of Mentone.
She was preceded in death by her husband, parents, a daughter Beverly (Jim) Comer, a brother Wendell D. Good, and sister, Carmen (Herman) Alderfer.
Friends may visit with Joan’s family from 11 to noon on Wednesday, January 6, 2016 in the Johnson-Danielson Funeral Home, 1100 N. Michigan Street, Plymouth. Funeral services will immediately follow at noon with Rev. Eric Ahlemeyer of Calvary Lutheran Church, officiating.
Entombment will take place in the New Oakhill Mausoleum, Plymouth.
Memorial contributions may be made to the Marshall County Historical Museum, 123 N. Michigan Street, Plymouth, IN 46563.