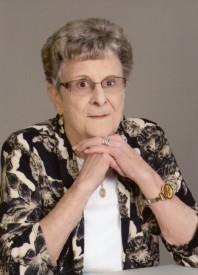 Frances M. Houin, 87, passed away peacefully and entered the embrace of Christ Saturday morning, at home, in the care of her family and the Center for Hospice.
She was born on April 23, 1931 in St. Louis, Missouri the second of two daughters to Alex L. and Edith P. (Bertram) Hug. She was raised there and graduated in 1949 from Immaculate Conception High School.
While assisting with a U.S.O. event in St. Louis she met Army Corporal Lawrence E. Houin and after some courtship, they entered into the sacramental bonds of Holy Matrimony on October 1, 1955 in St. Pius Catholic Church, St. Louis.
They then made Plymouth their home and dairy farming their livelihood. She enjoyed assisting with the farm and became an accomplished homemaker. She took great pride in her family of five children who all enjoyed her cooking skills, especially baking cakes and pies. Frances also liked sewing and making various crafts including ceramics.
She was a member of St. Michael Roman Catholic Church in Plymouth, served in the Altar Rosary Society and the St. Michael Gift Shop. Frances was a role model to her family and others as she practiced her faith in quiet reverence.
Together with Lawrence they enjoyed 63 years of memories in Marshall County and over 27 winters spent in the Tampa, Florida area.
Her family members are: her loving spouse Lawrence, children Lawrence E. (Mary Beth) Houin Jr. of Plymouth, Nancy M. Houin (deceased â€“ 1976), Keith J. (Cathy) Houin of Colorado Springs, CO, Cynthia R. (Bryan) Casper of Argos, and Marilyn S. (Michael) Willson of St. Paul, MN along with 13 grandchildren and 10 great grandchildren.
Also surviving is a brother-in-law Frank Wahl of San Diego, California and sisters-in-law/brothers-in-law Theresa (Lloyd) Anderson, Betty (Mrs. Bernard) Houin and Marilyn (Mrs. Leo) Houin all of Plymouth.
Frances was preceded in death by her sister Lorraine Wahl.
Visitation will be held on Monday, December 3rd from 4 – 8 p.m. in the Johnson-Danielson Funeral Home, 1100 N. Michigan St., Plymouth. A rosary will be recited at 7:30 p.m. Visitation will continue after 10 a.m. Tuesday, December 4th in St. Michael Catholic Church, 613 N. Center St., Plymouth where a Mass of Christian Burial will begin at 11 a.m. Pastor John Korcsmar C.S.C. will preside with Fr. Craig Borchard concelebrating.
Burial will follow in New Oak Hill Cemetery, Plymouth.
Memorial gifts may be made to St. Michael School, c/o 612 N. Walnut St., Plymouth, IN 46563.