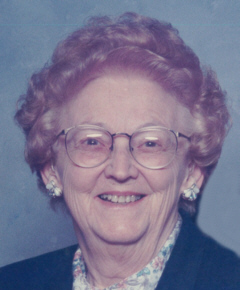 Frances L. Quivey, formerly of 9102 Quince Road, Plymouth, died of natural causes in Rock Hill, South Carolina on Tuesday, January 25, 2011, where she had been a resident since 2007. She was 92 years old.
A lifetime Marshall County resident, Frances was born the daughter of William T. and Alice Stonehill Dawson on May 12, 1918. She graduated from West High School with the class of 1936 and completed her degree work at South Bend College of Commerce.
On December 1, 1940, in Plymouth, Virgil Quivey and Frances L. Dawson were married. Virgil preceded her in death on April 23, 2004.
Along with being a farmer’s wife, she worked at Syler Seed Company, and as a clerk in the Marshall County Welfare office, before working as a Secretary for Superintendent, John Mars at Culver Military Academy.
Frances was a member of the Christian Fellowship Class of the First United Methodist Church. She had a love for music and also enjoyed sewing and attending to her flower garden. She was most proud of her children, grandchildren
and great grandchildren and loved being surrounded by their company.
Frances is survived by a daughter and son-in-law, Joan and Robert Matejka, living in South Carolina.
Two grandsons and their spouses also survive. They are: Jon and Chimene Speer, Plymouth, and Jeff and Theresa Speer, South Bend; and three granddaughters: Julie and Andre Dickerson, South Carolina; Lisa and Ken Robison and Marcie Matejka, both in North Carolina.
Eight Great-Grandchildren survive as well.
Frances was preceded in death by her parents, her husband and two daughters: infant Karen Quivey and Janet Speer. A sister, Norma died in 1925. Friends may visit with the family to celebrate Frances’ life from 9 to 11 a.m. on Wednesday, February 2, 2011, in the Johnson-Danielson Funeral Home, 1100 N. Michigan St., Plymouth.
A Memorial service will be held in the funeral home at 11 a.m. Wednesday, February 2, 2011. The Rev. Larry Marhanka, pastor of the First United Methodist Church, where Frances was a member, will officiate.
Interment will be in New Oakhill Cemetery, Plymouth.
The family requests that memorial gifts be made to the First United Methodist Church’s Music Fund 400 North Michigan Street Plymouth,Indiana 46563, or the charity of the donor’s choice.
Funeral Director – Kevin Russell – kevin@johnson-danielson.com