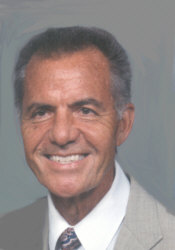 Franklin D. “Frank” Howard, 71, of 10145 Quince Road Plymouth, died at 5:50 a.m. Monday, December 15, 2003 in the Bremen Health Care where he has resided since August 2001. Frank died of natural causes due in part to his diagnosis of Alzheimers.
Born in Alger, Ohio, on November 7, 1932, he was the son of Goebel and Victoria Fletcher Howard. He was a 1950 graduate of Harding High School in Marion, Ohio. He then graduated from Ball State University in 1954 with a degree in Elementary Education and was a member of Kappa Sigma Kappa. It was there he would meet his bride, Joyce E. Burkett, they were married September 5, 1952 in Ashville, North Carolina. Following college they made Plymouth their home. Frank was to teach only one year, the fourth grade at Plymouth’s Washington School.
On June 15, 1955, Frank was called to serve with the U.S. Army in Korea. Frank was a sharpshooter and was honorably discharged on March 27, 1957.
Following his return from service, he worked for McCracken Homes. With a gift in sales, Frank worked for over 15 years with Nystrom Co. and the Denoyer-Gephart Co. representing various educational school supplies.
He then worked as an insurance broker and retired in 1997 from United American Insurance Company.
Frank enjoyed time with his family, playing golf and keeping fit. Together, he and Joyce, his wife of fifty-one years, loved to dance and were members of the South Bend 100 Club. Their travel experiences would include a European trip to seven countries and later with his sister Jean and husband Richard they would tour England, Scotland, Ireland and Whales. A member of the Plymouth Church of the Brethren for over 45 years, Frank had served on the Finance Board as treasurer. He was a former President of the Plymouth Jaycees and received numerous local and national awards. Frank was also a hard working member of the Plymouth Optimist Club.
In 1971, Frank ran for mayor of Plymouth on the Republican ticket and was later presented a Sagamore of the Wabash by Gov. Robert Orr.
Frank is survived by his wife Joyce, two daughters and six grandchildren. They are: Deborah L. & Kurt Caudell of Springville, Indiana and their children; Caleb A., Collin G., Cain L. and Carly R. Caudell and Susan H. & John Wendel of Plymouth and their children Jared M. and Jordan C. Wendel. Three sisters also survive, Ann Sunday of Toledo, Ohio, Imogene “Jean” Schirr of Columbus, Ohio and Loretta Stahl of Muncie along with several nieces and nephews. Mary Burkett of Plymouth, Frank’s mother-in-law survives as well.
He was preceded in death by his parents, a half brother Alfred Oliver and his father-in-law, Floyd Burkett.
Visitation will be held in the Johnson-Danielson Funeral Home, 1100 N. Michigan St. Plymouth on Wednesday from 4 – 8 p.m. and one hour prior to the 11 a.m. services in the Plymouth Church of the Brethren on Thursday, December 18, 2003. The Rev. David Kerkove will officiate.
Burial will follow in the New Oakhill Cemetery where Military honors will be accorded him by members of the V.F.W. Post 1162.
Memorial gifts in Frank’s memory may be made to the Church or Alzheimer’s Services of Northern Indiana, 108 N. Main St. Suite 707, South Bend, Indiana 46601-1617.