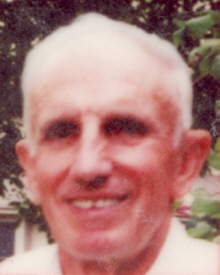 Frank Leslie Doll, 86, of Bourbon, died at home at 2:20 a.m. on Thursday, Oct. 20, 2011.
Frank was born in Oak Park, Ill. on August. 24, 1925. He was the son of Leslie F. and Josephine Newberg Doll. He graduated from Austin High School in 1943 and from Wright Jr. College.
He served honorably in the US Army from 1943 to 1946 as a Tech Sergeant, (T5) with the 1346th Combat Engineers in Europe and Okinawa during WWII.
On November 19, 1944, in Chicago, he was married to Mary Ann Grajkowski. Mary Ann died on January 19, 1986.
On July 1, 1989, in Chicago, Frank and Dolores McCauley were wed.
Frank was a Chicago Fire Fighter for 23 years, serving with Engine Co. 129. He retired in 1978. He was a volunteer Fire Fighter in Lemont for 10 years and lived in Plymouth for many years after.
Frank was a Master Carpenter in carpenters Union No. 10. He was a member of the American Legion in Lemont and a parishioner at St. Michael Catholic Church in Plymouth.
He is survived by his devoted wife Dolores of Bourbon. He is also survived by his brother Michael Anthony Doll of Las Vegas Nevada. His children: Joy (Charles) Wolf, Michael A. (Jenny) Doll, Mary Ann (William) Saindon, Frank Leo Doll, and John J. (Anne) Doll. He is also survived by his stepchildren: Kathryn, Patrick, and Paul J. McCauley.
Thirteen grandchildren and seven great-grandchildren also survive.
Frank was preceded in death by his parents, an infant sister, Georgiana, a brother, Sgt. Gerald E Doll, Chicago Police Dept, and his first wife, Mary Ann Grajkowski Doll.
Friends and family will be welcomed at the Johnson-Danielson Funeral Home, 1100 N. Michigan St., Plymouth, to share memories and condolences with Frank’s family on Tuesday, October 25, 2011, from 4 to 7 p.m. EDT
A Mass of Christian Burial, will be held in St. Michael Catholic Church, 613 N. Center St., Plymouth, at 10:00 a.m. EDT on Wednesday, October 26, 2011. The Rev. Father William Kummer will officiate. Military honors will immediately follow provided by members of the Plymouth American Legion Post 27, V.F.W. Marshall County Post 1162 and D.A.V.
Burial will be held in St. Alphonsus Cemetery, located on State Street north of Weimer in Lemont on Thursday October 27, 2011 at noon central daylight time.
In lieu of flowers memorial contributions in Frank’s memory may be made to the Center for Hospice Care, 112 S. Center Street, Plymouth, Indiana 46563