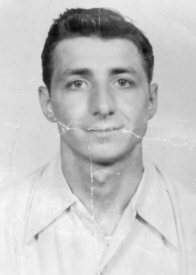 Frank Polletta, 85, peacefully entered eternal life at 6:10 p.m. on Wednesday, February 27, 2013, in Miller’s Merry Manor Plymouth.
He was born at home in Steger, Illinois, on March 17, 1927, the son of Frank and Asunta (Stella) Polletta.
He graduated from Bloom High School in Chicago Heights, Ill., and enlisted in the United States Navy, serving during WWII and was honorably discharged on August 2, 1946.
He married his childhood sweetheart, Mildred E. Laudanskis on June 26, 1948 in Saint Cashmere Church, Chicago Heights, Ill. They lived in Park Forest, Ill. for 23 years, Dyer, Ind. for 15 years and finally retiring to Plymouth in 1994.
Frank was a salesman for Continental Bread Co. based in Madison, Ill. for 33 years, retiring in 1989.
An active man, he was an auxiliary police sergeant on the Park Forest, Ill. Police Dept. for six years.
A member of St. Michael Roman Catholic Church in Plymouth, he was a member of the American Legion Post 27 in Plymouth and worked with the Marshall County Boys and Girls Club for ten years.
Frank loved the game of pool and was good at it. When he retired he taught pool along with his friends to the children in the Club and won awards when playing against other clubs. He was a dedicated hunter and fisherman.
Frank is survived by his devoted wife, Millie and by their daughter; Barbara (Greg) Fox, Apopka, FL and their daughters, (granddaughters) Tanya Jo (Joel) Rueger, Mt. Dora, FL and Erica (Steve) Novak, Apopka, FL.
A daughter-in-law, Barbara Polletta of Hobart, IN, preceded in death by Frank and Millie’s son, Darrell on October 31, 2011. Darrell’s children are; Rebecca (Scott) Scheeringa, Crown Point, IN, Kimberly (Nick) Lacy, Cedar Lake, IN and Brittany Polletta, Crown Point, IN.
Six great-grandsons and one great-granddaughter survive as well. They are: Danny Cadena, Derek Rueger, Steven Novak, Travis Novak, Josh Lacy, Justin Lacy, and Alexa Polletta.
A step-grandson; Robert (Kelly) Meyer, Beloit, WI and step-granddaughter; Michelle (Michael) Connolly, of Chicago, IL survive along with two step-great-grandsons and three step-great-granddaughters. They are; Jonathan Meyer, Neal Connolly, Gina Meyer, Mary Meyer, and Paige McDonough. A sister-in-law; Alice Hite survives along with many caring nieces and nephews.
Frank was preceded in death by his parents, his son, Darrell, brothers; Joseph, Ralph, Tony, and Hank Polletta, sisters-in-law; Juanita, Betty and Seta Polletta, a brother-in-law; Dale Hite, two nephews; David and Joe “Butch” Poletta and a niece, Joanne Kemek.
Visitation will be at the Johnson-Danielson Funeral Home, 1100 North Michigan St., Plymouth, from 3 to 8 p.m. (EDT) on Friday, March 1, 2013. A Rosary will be recited at 7 p.m.
A Mass of Christian Burial will be at 11 a.m. in St. Michael Catholic Church, 613 N. Center St., Plymouth, with Father William Kummer officiating.
Burial will follow in New Oakhill Cemetery, with Military Honors provided by members of the Plymouth American Legion Post 27, Veterans of Foreign Wars – Marshall County Post 1162 and the D.A.V.
Preferred are memorial gifts to St. Michael Church, 612 N. Walnut St., Plymouth, IN 46563 or to St. Jude Children’s Research Hospital, 262 Danny Thomas Place, Memphis, TN 38105.