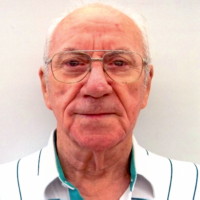 Fred E. Struble Jr. 95, passed away peacefully on Tuesday, March 31, 2020 at Signature Health Care in Bremen, Indiana.
Born in South Bend, Indiana, Fred was the son of Frederick and Blonda (Sarber) Struble.
Fred married Marjorie (Smith) Struble on July 12, 1945 in Pratt, Kansas. Soon after they were married, he enlisted in the Airforce. Fred served with the 346th Bomber Group attached to the 462nd Squadron as an airplane electrical mechanical side door gunner on a B-29 Fortress named the “Tucker’s Trolley,” where he made the rank of SSGT. After being honorably discharged, Fred went to work as a foreman where he worked as a screw machine operator until he retired in 1987. He enjoyed RC model airplanes, fishing, hunting, traveling, eating and racing. Fred belonged to the Pacific Air Museum in Ford Island, Hawaii and the National WWII Museum in New Orleans, Louisiana. Fred is survived by his children; Linda Struble of Plymouth, Dennis Struble of Tampa, FL and Gary M. Struble of Lakeville; and 11 grandchildren.
He was preceded in death by his wife, parents and sister Norma (Struble) Faulstich.
Due to the restrictions on social gatherings, the family will have a private memorial gathering at a later date.