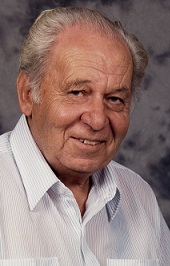 Frederick L. Werner, 90, passed away on October 22, 2019, at his sonâ€™s home in Fruitland Park, FL. He was born in Peru, Indiana on January 30, 1929. He retired from United Telephone of Florida as a network engineer with 34 years of service, and was a member of Otto Wettstein Jr Pioneer Club. He served in Japan during WWII as a Corporal in the United States Air Force.
Fred was an avid fisherman and enjoyed tinkering with old clocks. He is survived by his sons; Jon (Mary) Werner of Fruitland Park, FL, Ronald Maze of Koontz Lake, IN, Richard (Sue) Maze of Plymouth, IN, and his daughter, Mardene Reid of Ponte Vedra Beach, FL, as well as, many grand, great-grand and great-great-grandchildren. He was preceded in death by his wife of 48 years, Ruby, as well as sons: Stephen M. Werner, Charles M. Maze, Gerald W. Maze, Francis E. Maze, James Maze and daughter Lora L. Rike. A Visitation will be held at Johnson-Danielson Funeral Home, 1100 N. Michigan Street, Plymouth, on Tuesday, October 29, 2019 from 11:00-1:00 p.m. A graveside service will immediately follow at New Oak Hill Cemetery, Plymouth with Military Honors provided by members of the American Legion Post 27, Veterans of Foreign War- Marshall County Post 1162 and Disabled American Veteran Chapter 42.