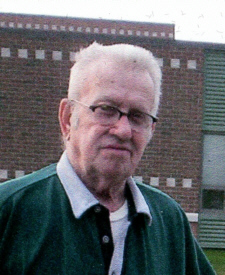 Frederick R. Hunley, 88, passed away in his daughterâ€™s home at 10:55 a.m. on Wednesday, December 07, 2016.
Fred was born in on July 4, 1928 in Peoria, Illinois to the late Henry and Florence (Herman) Hundhausen.
On December 7, 1946 in Chicago, Fred took as his bride the former Helen T. â€œGeriâ€ Gomolski. She preceded him in death on April 23, 2004.
Fred retired from the City of Chicago, where he was a heavy equipment mechanic. He enjoyed bowling and gambling. He is survived by his daughter and a son-in-law; Sherry A. and Stephen Slater of Plymouth, and son and a daughter-in-law; Wayne E. and Virginia Hunley of Leesburg. Also surviving are his three grandchildren and three great-grandchildren. He was preceded in death by his parents, wife, one grandchild and one brother.
The Johnson-Danielson Funeral Home in Plymouth, is in charge of arrangements.
There will be no public service or visitation.