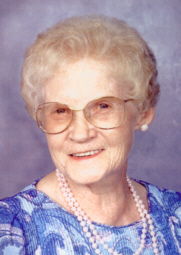 Freida Lucile Swihart, 87, died of natural causes at Miller’s Merry Manor, Plymouth on Friday April 30, 2010 at 2:15 pm.
The daughter of Melvin L. and Nora E. Fry Wilhelm, she was born in Remington, Indiana, on October 11, 1922.
She graduated from Argos High School with the class of 1941
On March 21, 1942, in Plymouth, she became the bride of Donald Swihart and was a resident of North Twp., Marshall County, for over 40 years. Don died in 2006, following a long and happy marriage of 64 years.
For ten years she worked as a cook at LaVille High School, retiring in 1983.
Freida was a former member of the Royal Neighbors, LaPaz and the Happy Homemakers Home Economics Club, also in LaPaz.
Freida and Don loved to travel and camp in their motor home. They lived in Avon Park, FL. for nearly 15 winters.
A loving mother, she is survived by her two sons and two daughters.
Her sons are: Richard L. & Alice Swihart, Walkerton; and David E. & Brenda Swihart, Plymouth.
Her daughters are: Sandra L. and Jerry Anders, Plymouth; and Linda K. and Paul Tyler, LaPaz.
Freida is also survived by three step-daughters Brenda L. and David Hummel, Bremen; Donna S. Roberson, Bremen and Debra A. Swihart, Warsaw.
Twenty grandchildren and 30 great-grandchildren survive as well.
She was preceded in death by her husband, parents, and a great granddaughter Haley.
Friends are invited to celebrate the life of Freida Swihart on Tuesday evening, May 4, 2010 from 4 to 8 p.m. at the Johnson-Danielson Funeral Home, 1100 N. Michigan St., Plymouth, Ind.
Funeral services for Freida will be held at 11:00 a.m. on Wednesday May 5th, 2010 in the funeral home, with Pastor Glenn Jerrell officiating.
Burial will be next to her beloved husband in the New Oakhill Cemetery, Plymouth.
Memorial gifts in Freida’s name may be given to the Alzheimer’s Association.