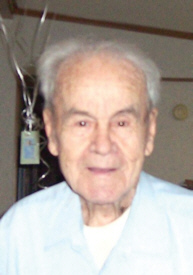 Fremont “Booksie” Philip Melvin Books, 102, long time resident of Plymouth since he was twelve years old, passed away peacefully in his own home on May 4, 2016, from natural causes.
He was born February 27, 1914 in Peru, Indiana, to the late Curtis A. and Winifred (Hattery) Books.
Fremont graduated from Plymouth High School in 1932 and later attended Indiana University. He served in the United State Navy during WWII. He was stationed at the Naval Base in San Diego, California.
Fremont was married to and outlived three wives. His first wife was Norma Benson. In 1948 he married Bernice Smith and they spent over fifty-years together before she passed away. His third wife was Mildred Thompson, who he was married to from 2003 until her passing in 2011. During the great depression, Fremont worked at the Superior Coal Company. He and a friend started the B & B Stove Shop on West Jefferson. He eventually bought out his friend and the business evolved into B & B Used Furniture and then B & B Antiques. He was an avid collector of antique furniture, glassware, coins and stamps. He retired from the antique business in 1976 and began wintering in Florida, where he was able to devote more time to his reading hobby and began a second career of writing. He published numerous short stories and poems and a series of articles which he developed into a book, “How to Bargain for Antiques and Collectibles: A Primer.” He also wrote a weekly article entitled “As I Recall” for the Plymouth Pilot News well into his 90’s. He and his wife, Bernice, travelled extensively, visiting Russia, Australia, New Zealand, Finland, Mexico, Holland, France, England, Germany, Switzerland and Canada. Throughout his life he was an avid fisherman and looked forward to annual trips with his children and grand-children to Birchwood, Wisconsin, the “Bluegill Capital.” He was a fierce competitor whether on the football field, the tennis court or monopoly board. He looked forward to Scrabble and card games with friends and did so until the last couple weeks of his life. A little know fact about Fremont is that at the age of sixteen he was a winner in an American Boyfriend photo graphic contest in a teen magazine. Fremont served on several local boards; Draft Board, Marshall County Comprehensive Planning board, Campfire Board, and the Board of Zoning Appeals. He was also a Boy Scout volunteer. He is survived by a son and a daughter-in-law; Glen and Jane Books of Basking Ridge, New Jersey, two daughters and sons-in-laws; Candy and Charlie Poor of Plymouth, Cindy and Jon Gurland of Englewood, Florida. Also surviving are eleven grandchildren and spouses; Mark (Alexis) Books, Judith and Jennifer Books, Melissa (Dave) Williams, Leilani Poor, Elysia (Tyler) Easton, Patrice Poor, Mellinda (Jon) Bolas, Miranda Poor, Molly (Erik) Christiansen and Hannah Gurland, nine great-grandchildren; Elizabeth Williams, Chani and Oliver Bolas, Emerson Books, Claire and Ansel Easton, Luke Poor, Dean Christiansen, and Beatrice Hall. The family will receive friends from 5-7 PM on Friday, May 13, 2016 in the Johnson-Danielson Funeral Home, 1100 North Michigan Street, Plymouth.
A celebration of life service will be at 11:00 AM on Saturday, May 14, 2016 in the funeral home.
Burial will be in the New Oakhill Cemetery, with Military Honors provided by members of the American Legion Post 27, Veterans of Foreign Wars- Marshall County Post 1162 and D.A.V.
Memorial contributions may be directed to the Plymouth Public Library, 201 North Center Street, Plymouth, Indiana 46563, so that all children can experience the joy of reading.