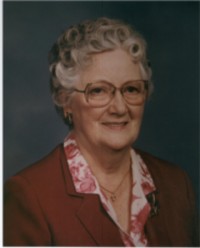 Gertrude “Louise” Stinson, 93, 1900 Hillcrest, Plymouth, died at her residence at 2:30 p.m. on Sunday, May 15, 2005, under the loving care of her family and Marshall County Hospice.
Born in Sandoval, Illinois on April 13, 1912, she was the daughter of Silas and Susan White Dolsen. Louise graduated from Sandoval High School and the Chicago College of Business.
On October 14, 1933 in Sandoval, Louise and Joseph M. Stinson were married. Joe died on January 6, 2003.
Louise and Joe lived in Downers Grove, Ill., until 1945, when they moved to Plymouth where they established the Stinson Metalcraft Business located on W. Jefferson St., which they ran for over 40 years.
Louise established one of the first Federal Day Care Centers at the shipyards of Seneca, Ill., during W.W. II. She also owned and operated a pet grooming business in Plymouth, which she ran for 25 years.
She was a member of Trinity United Methodist Church, Plymouth.
Louise is survived by a daughter, Susan JoAnn and Loren Sheetz of Ft. Wayne, Ind., and a son, Richard P. and Sue Stinson of Plymouth.
Four grandchildren and a great grandson also survive. They are: Kimberlee and Jim Baughman and their son Brett of Leo, Ind.; Jill and Richard Lane of Ft. Wayne, Ind.; Amanda Cook of Warren, Ind. and Eric Stinson of Indianapolis, Ind.
She was preceded in death by her parents, her husband, Joe, and five half-sisters and two half brothers.
There will be no visitation.
Family services will be held. The Rev. Charles Krieg of the Salem United Methodist Church, Bremen, will officiate.
Johnson – Danielson Funeral Home, 1100 N. Michigan St., Plymouth, is in charge of the arrangements.
Burial will be in New Oakhill Cemetery, Plymouth.
Memorial gifts in Louise’s name may be made to the Marshall County Humane Society or Marshall County Hospice.