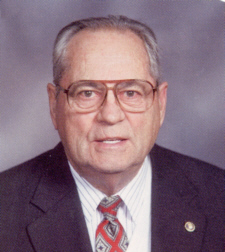 Gale L. Murphy, 95, of Plymouth, passed away at 10:30 a.m. on Sunday, June 26, 2011, in the Catherine Kasper Living Center, Donaldson, Ind.
He was born, together with a twin brother, Dale A. Murphy, on October 17, 1915, in Marshall County, the son of Homer A. and Grace E. Vinnedge Murphy. He lived in Marshall County most of his life.
Gale graduated from Lakeville High School with the class of 1935. He served in the U.S. Army in World War II. As a Technical Sergeant he was stationed for three years in the South Pacific.
He was the owner/operator of Lake of the Woods Grocery Store. He also worked as a welder for South Bend Fabricated Steel for 18 years, retiring in 1981. He was also associated with Alonzo Oil, North Liberty and at Associates in South Bend.
Gale’s first wife was Dorothy Wynn. They married in 1937. Dorothy died in 1967. In 1970, Gale and Lyda Epley Trahan were married: she died on July 12, 1998.
Gale is survived by a son, John W. Murphy of Plymouth and a daughter –in-law, Micky, of San Diego, California.
Also surviving are step-daughters, Sherry (Robert) Tuszynski, Naperville, Ind. and Janelle (Walt) Jurkiewicz, N.Y. and a step-grandson, Bruce Tuszynski.
Several grandchildren and many great-grandchildren survive as well, together with his twin brother, Dale, Donaldson, Indiana. Numerous nieces and nephews also survive him.
Gale was preceded in death by his parents, two wives, a son, Michael and two brothers, Kenneth Murphy, Dorlen W. Murphy.
A Mason for over 60 years, Gale was a member of the Lakeville Masonic Lodge, #353, a member of the Scottish Rite of South Bend and a member of the Orak Shrine in Michigan City. He was the former Fire Chief of Lake of the Woods Fire Dept., and helped to build the fire station.
He was also a member of the American Legion, Post 365 and the Veterans of Foreign Wars, Post 8972, both of whom will accord him full military rites together with the South Bend Honor Guard at his gravesite on Wednesday, June 29.
Gale joined in June 1984, the First United Church of Christ in Plymouth where he served as an Elder, a position, he held for many years.
Visitation with Gale’s family will be held on Wednesday, June 29, 2011, from 9 a.m. to 11 a.m., followed by Masonic Services at 11 a.m. in the Johnson-Danielson Funeral Home, 1100 N. Michigan St., Plymouth.
Funeral services will take place after the Masonic Service. The Rev. Brian White, pastor of the Lakeville United Methodist Church will officiate. Burial, with full military honors, will follow in the South Lawn Cemetery, South Bend, Ind.
Memorial gifts in Gale’s memory may be made to The Center for Hospice Care112 South Center Street Plymouth, Indiana 46563 or to the Catherine Kasper Living Center P.O. Box 1, Donaldson, Indiana.