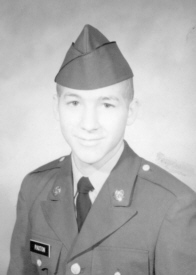 Gary L. Paxton, 60, a resident of Peach Road, Plymouth, formerly of Rochester, died of natural causes, at his home, at 10:45 p.m. on Monday, June 18, 2012. Gary had been in the care of the Center for Hospice and his family.
Gary was born in Rochester, Indiana on November 12, 1951. His surviving parents are Edward L. Paxton, Rochester, and Gisele J. Morris of Plymouth.
He attended Rochester High School where he was involved in sports.
At the age of 18, Gary enlisted in the United States Army. He proudly served in Vietnam attaining the rank of E5 and was highly decorated, having earned the Air Medal, two Bronze Stars,and two Army Commendation Medals. The Citations were for acheivement in aerial flight, operations against hostile forces, meritorious service. He was involved in more than 25 aerial flights over enemy territory in support of ground operations. Gary enjoyed reunions with his unit – 1st Battalion 8th Air Cavalry – Jumping Mustangs.
On December 16, 1974, in Kokomo, Gary and Marla L. Hunt were married.
While living in Tennessee, he was a dairy farmer and milk truck driver.
Gary enjoyed his family and grandchildren along with watching various sporting events, guns and Bob Seger. He was a lifetime member of the Rochester V.F.W. and was recognized as a professional when it came to billiards.
He is survived by his wife Marla, his parents, and children: daughter Tracy L. Froehlich of Plymouth with her children Logan and Colby, son Jamie E. (Angela) Paxton of Plymouth and children, Jamison, Joshua and Brianna, daughter Robin r. (David) Underwood of Antioch, TN and their daughter Valarie.
No public services are planned.