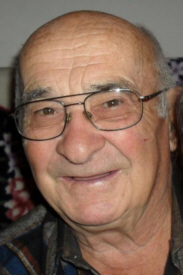 Gene L. Rowe, 86, a lifetime Marshall Country resident, passed away early Sunday morning August 9, 2015. Gene was born in LaPaz, Indiana on June 12, 1929 to Francis and Pearl (Flesher) Rowe. He attended LaPaz Schools. On March 26, 1960 he married the former Helen “Louise” Griggs in Lakeville.
Gene served our country as a United States Marine during the Korean War and became an accomplished auto mechanic. For years he applied that trade with the Jeffirs Motors in Plymouth. He then went on to work as an assembler at Bendix Aircraft Division in South Bend, where he worked for 38 years. He was a member of the VFW – Marshall County Post 1162, Plymouth American Legion Post 27, Plymouth Moose Lodge No. 741, and the Autoworkers Union Local No. 9 in South Bend. Plymouth Wesleyan became his church home.
Attending stock car races and family trips to Great America are now fond memories. Gene is survived by his five children: Mary L. (Dennis) Hanthorn, Chuck G. (Wanda) Rowe, Kimberlee J. (Sidronio) Teutle and Michelle L. Rowe all of Plymouth and Mark Rowe of Elkhart. His sister Velma Jordan of Avilla, also survives with ten grandchildren and several great grandchildren.
He was preceded in death by his parents and his brother Harold “Jack” Rowe. Visitation will be held on Thursday August 13th from 10 – 12 noon in the Johnson-Danielson Funeral Home, 1100 N. Michigan St., Plymouth. Funeral services will be held at 12 noon in the funeral home with Rev. Ed Friberg officiating.
Burial will follow in the New Oakhill Cemetery with military honors provided by members of the Plymouth American Legion, Veterans of Foreign Wars – Marshall Co. Post 1162 and the D.A.V.
Memorial contributions can be made to the Center for Hospice Care 112 S. Center St., Plymouth, IN 46563 or the Marshall County Cancer Association c/o Shirley Gidley 9739 Sunnyside Drive, Plymouth, IN 46563.