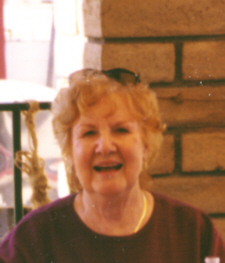 Geneva “Ginny” Caudill, 9770 Pine Road, Plymouth, died of natural causes in Memorial Hospital, South Bend at 4:20 a.m. on Thursday, October 26, 2006. Ginny was just over a month shy of her 82nd birthday, having been born on November 30, 1924.
She was married to William Caudill, Jr., in Dayton, Ohio, on January 20, 1942. William died on February 28, 1985.
She relocated from Chicago to Marshall County in 1990, after retiring from Zenith Radio and Electronics, following 30 years of employment.
Her second husband, Richard Krivanek, who she married on January 6, 1996, died on January 20, 2002.
Ginny enjoyed spending time with her family. One of her fondest pleasures was wintering at her home in Arizona. She was a member and volunteer for Women of the Moose, the Knox VFW and the American Legion. She also was a member of the Ladies Auxiliary of Saint Joseph Regional Medical Center.
Ginny is survived by son and daughter-in-law and two daughters and sons-in-law. They are: Susie and Bill Boyle, Chicago, Illinois, and Sandra and Roy Gregory, Plymouth, Indiana.
Her son is Don and Verna Caudill, Pittsburg, Oklahoma.
A close friend and companion, Louis Myers also survives.
She is also survived by three grandchildren: Jennifer and Mark Allen of Koontz Lake, Indiana; Rachel Caudill of Tulsa, Oklahoma and T.J. and Salena Caudill of Pittsburg, Oklahoma.
A great-granddaughter, Brittany Allen of Koontz Lake and a great-grandson, John William Caudill of Pittsburg, Oklahoma, also survive.
Ginny was preceded in death by her husband and a grandson, William “Billy” Nichols on June 29, 1996.
Friends will be welcomed by Ginny’s family to celebrate her life and share their memories on Sunday, October 29, 2006, from 3 to 8 p.m. and from 7 a.m. to time of the service on Monday at the Johnson-Danielson Funeral Home, 1100 N. Michigan Street, Plymouth. There will be a Ladies of the Moose service at 7:00 pm on Sunday.
Services for Ginny will be held at the funeral home on Monday, October 30, 2006, at 11 a.m. Burial will be in the Bass Lake Cemetery, Bass Lake, Indiana.
Memorial contributions in Ginny’s memory may be made to a charity of the donor’s choice.